In a finely tailored ensemble, Neetu Kapoor looked like a vision. 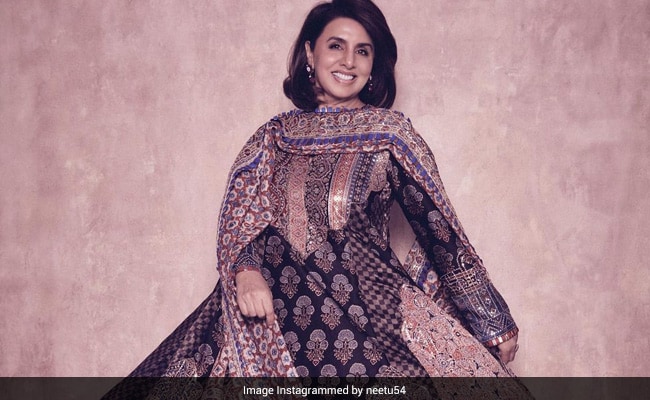 Indian Idol 12 recently shot a special episode remembering the late actor Rishi Kapoor. To give it a personal touch, the makers decided to call up the person who was closest to Chintu ji. Any guesses? Yes, it was none other than his wife Neetu Kapoor. In a finely tailored ensemble, Neetu Kapoor looked like a vision. She paired it with statement earrings and a finger-ring. Describing her experience of being a part of this episode, the actress said, "Stress less and enjoy the best. Had lots of fun on the sets of Indian Idol!"

In a promo, uploaded by the makers, actors Jeetendra, Rakesh Roshan and Prem Chopra share their memories of Rishi Kapoor. Neetu Kapoor was seen struggling to hold back her tears. The 62-year-old later received a surprise as a recorded video message by Ranbir and Riddhima was played on the screen.

Neetu Kapoor also posted a throwback clip remembering her late husband on the 11th-month prayer meet. "Since today is Rishiji's 11-month prayer meet felt like sharing some moments from our last trip to NYC."

Last year, Neetu Kapoor's dance rehearsal video with choreographer Rajendra Singh created a buzz on the Internet. She was seen grooving to Ranbir and Madhuri Dixit's song Ghagra from Yeh Jawaani Hai Deewani. It is rumoured that she was practising for Ranbir and Alia's sangeet ceremony.