IIFA 2015: Deepika and Anushka on Ranveer's 'Honesty' and 'Bravery' 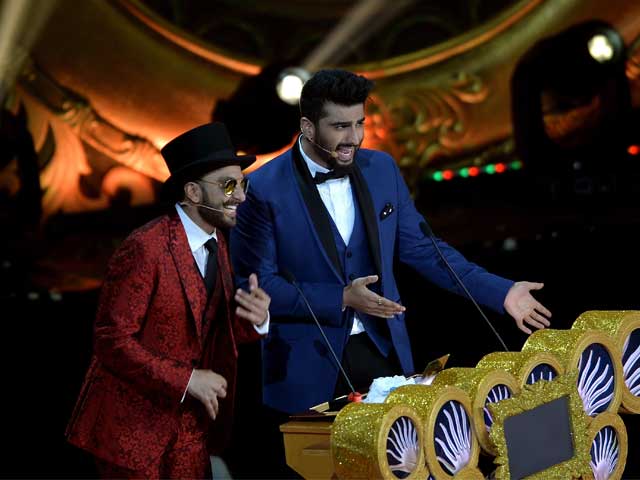 Kuala Lumpur: Notching up the glam quotient, the stars descended on Kuala Lumpur's Putra Stadium for the grand finale of 16th edition of the IIFA Awards held on June 7.

Show host Ranveer Singh, dressed in a Rohit Gandhi and Rahul Khanna brocade suit, took over the green carpet and had his Dil Dhadakne Do co-star Farhan Akhtar and actor Hrithik Roshan dancing to his tune.

Anushka Sharma, who described her co-star's fashion as 'an act of bravery,' dazzled in a scarlet outfit by Gauri and Nainika. The actress, who was nominated for PK, was nervous about her stage performance and said all she wanted was a break. It seemed the green carpet was the place for her to meet colleagues as she and her PK director Rajkumar Hirani said award functions were where they caught up.

Deepika Padukone, dressed in a red and black Sabyasachi sari, was the darling of the crowd. The actress said the adulation 'overwhelmed her' and though she was nominated for Happy New Year, the actress said the award was not for her since there were far better performances.

When asked about his flying visit to Bangalore, Ranveer avoided answering. Deepika described her friend and Bajirao Mastani co-star as 'the most honest man,' be it his style or his persona.

Shahid Kapoor, happy about his Best Actor Award for Haider, denied rumors of a June 10 wedding. The actor said, "Congratulate me the day I get married."

Sonakshi Sinha, who made her singing debut at the IIFA Awards, paid a tribute to the leading men of Bollywood in her trademark dubsmash-style as she performed to songs like Jumma Chumma and Lungi Dance. Shraddha Kapoor paid a tribute to showman Subhash Ghai's hits, saying it was a 'dream come true' since as a child she would perform to Taal se Taal Mila from his film Taal. Mr Ghai received the Lifetime Achievement award this year.

Show hosts Ranveer Singh and Arjun Kapoor held their own, though we can say we missed the original 'Mental Boys' Farhan Akhtar and Shahid Kapoor too.