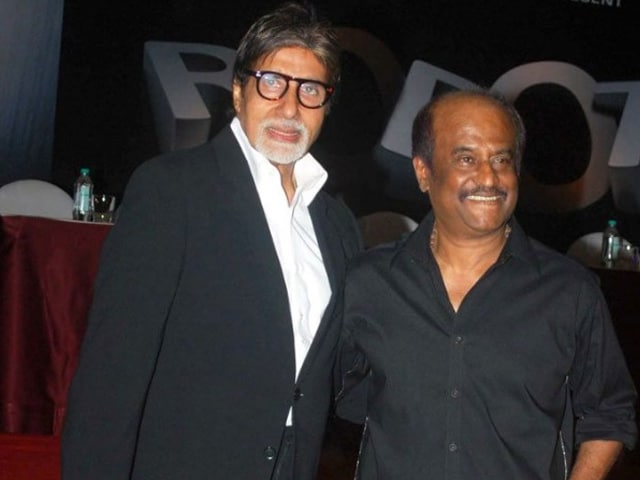 While Big B will be the chief guest at the event, Rajinikanth will be present to accept an award.

The 45th edition of the IFFI, which will start on November 20 in Goa, is all set to host a coming together of two stars, Rajinikanth and Amitabh Bachchan, who have helped millions of Indian cinema lovers soar into orbit over decades.

The two supreme stars of Indian cinema will attend the inauguration ceremony of IFFI at the Syama Prasad Mookerjee indoor stadium on the outskirts of the state capital.

While Big B will be the chief guest at the event, Rajinikanth will be present to accept the Centenary award for Indian Film personality of the year at a ceremony which will be attended by Union ministers for Information and Broadcasting Arun Jaitley (cabinet) Rajyavardhan Rathore (state) and Goa Defense Minister Manohar Parrikar, among others.

Mr Bachchan's entry this year is significant because the tenure of his absence from IFFI has coincided with his falling out with the Congress-led central governments in the recent past.

The President directed by Mohsen Makhmalbaf will be the opening film of the festival, while The Grandmaster by Wong Kar-wai, who will incidentally receive the lifetime achievement award, will be the closing film.

The Indian Panorama section will include 41 feature and non-feature films. Seven films from the India's North-Eastern region will also be screened at the event, as part of a special package.

"In all sixty two films in the world cinema section will be screened, while 15 films will be screened in the IFFI's competition section this year," says Shankar Mohan, a senior official of the Union ministry for Information and Broadcasting, who is also the Director of IFFI.

A special section of films that focus on dance, personality based retrospectives, and Masterclasses or specialised workshops conducted by master artistes will also form a part of IFFI 2014.

This positioning of China as a guest country at this year's event is a result of cinematic partnership as envisioned in an India-China agreement signed between the two countries when Prime Minister Narendra Modi hosted the Chinese President Xi Jinping earlier this year.

"This is only a beginning of sorts. We will see a greater interaction at all levels. Right from representatives of the Chinese film industry as well as other cultural exchanges between the two countries," Mr Mohan said.

Promoted
Listen to the latest songs, only on JioSaavn.com
The organisation of the latest edition of IFFI has also seen its share of controversy, with the main opposition party, the Congress, alleging a tendering scam in creation of temporary infrastructure for the event, a charge which the organisers have rubbished.

The festival will also pay tribute to British filmmaker Sir Richard Attenborough, the maker of the iconic film Gandhi, who died in August this year. His Academy Award winning film is also one of those films which will be screened to the general audience (non-delegates) free of cost every day.