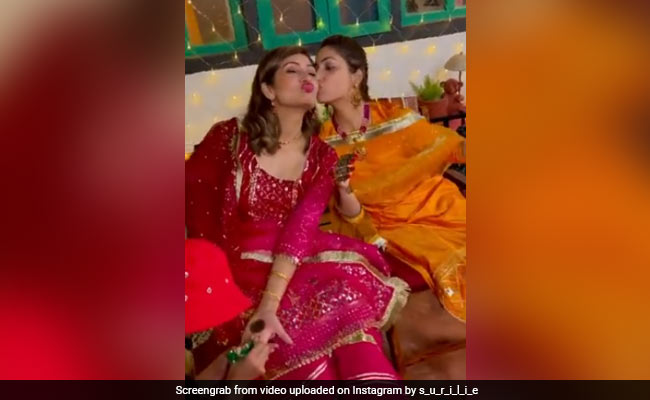 Yami Gautam, who married Uri director Aditya Dhar in an intimate ceremony earlier this month, has been sharing posts from her wedding album and they are a sheer delight. This time, however, her sister and actress Surilie Gautam posted an Instagram Reel and it is trending big time. The video happens to be from Yami's mehndi ceremony, in which the sister duo can be seen happily posing for the camera as the evergreen song Mehndi Laga Ke Rakhna from the 1995 film Dilwale Dulhania Le Jayenge plays in the backdrop. Yami looks stunning an orange ensemble, while sister of the bride looks pretty in red and gold. Surilie captioned the post: "Happiest Days."

Yami Gautam and Aditya Dhar surprised fans with their wedding announcement on Instagram. They wrote: "In your light, I learn to love - Rumi. With the blessings of our family, we have tied the knot in an intimate wedding ceremony today. Being very private people, we celebrated this joyous occasion with our immediate family. As we embark on the journey of love and friendship, we seek all your blessings and good wishes. Love, Yami and Aditya."

Yami Gautam was last seen in Puneet Khanna's Ginny Weds Sunny. She shared screen space with Vikrant Massey in the film, which released on Netflix a few months ago. She has starred in movies like Bala, Heo, Yuddham, Badlapur, Sanam Re, Kaabil and Uri: The Surgical Strike. She made her Bollywood debut with Vicky Donor, co-starring Ayushmann Khurrana after featuring in TV shows and commercials.