"Let's see what you got," wrote Samantha 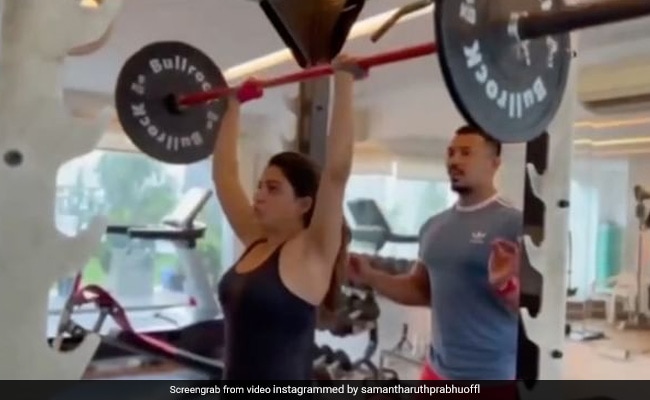 Samantha in a still from the video. (Image courtesy: samantharuthprabhuoffl)

So the Attack Challenge is keeping film stars busy these days. Tiger Shroff challenged Samantha Ruth Prabhu for the viral social media challenge, as a part of which stars are sharing high-octane workout videos. Tiger and Samantha, both have quite a bit of a reputation as fitness enthusiasts. Samantha, who aced the challenge, nominated Arjun Kapoor, wrote in her caption: Thank you Tiger Shroff for challenging me. Here you go. I further nominate Arjun Kapoor to take up the #attackchallenge. Let's see what you got." Arjun Kapoor, who too often posts workout videos on Instagram, reacted with an ROFL caption that read: "I definitely ain't got this gym for sure..." 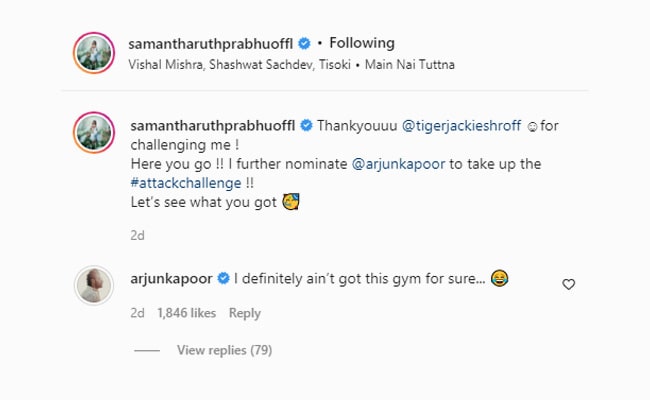 This is the post shared by Samantha Ruth Prabhu:

Tiger Shroff had shared this video and he wrote: "Thanks Rakul Preet for the challenge and all the best for your upcoming release. So here you go! I further nominate the amazing Samantha Ruth Prabhu and my brother and producer Jackky Bhagnani to show their versions."

Arjun Kapoor was last seen in the horror comedy Bhoot Police with Saif Ali Khan, Jacqueline Fernandez and Yami Gautam. Last year, the actor also starred in Sandeep Aur Pinky Faraar, in which he shared screen space with Parineeti Chopra. He also featured in Sardar Ka Grandson. He will next be seen in Ek Villain with Disha Patani, Tara Sutaria and John Abraham. He will also star in The Lady Killer with Bhumi Pednekar.

Samantha Ruth Prabhu will soon work with Downton Abbey director Philip John in a project titled Arrangements Of Love. In the film, Samantha will play the role of a bisexual character, who runs her own detective agency. She awaits the release of Kaathuvaakula Rendu Kaadhal and Shaakuntalam. The actress made her big digital debut with The Family Man 2.