Varun Dhawan and Natasha Dalal got married in Alibaug on Sunday 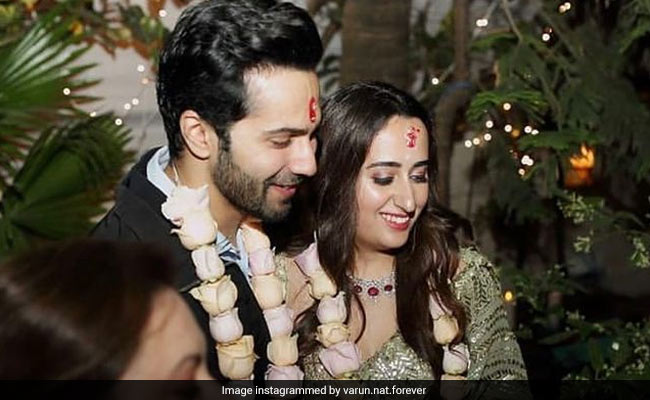 Varun Dhawan and Natasha Dalal, who got married on Sunday, have been trending for their wedding pictures on social media but have you seen the photographs from the couple's roka ceremony? If not, we are here to help. Several fans pages dedicated to the couple on social media, have been sharing pictures from the wedding festivities. The latest pictures that we chanced upon happen to be from Varun Dhawan and Natasha Dalal'sroka ceremony and they are all things nice. In the pictures, Varun can be seen dressed in formals, while Natasha can be seen wearing a traditional outfit.

Varun Dhawan confirmed dating Mumbai-based designer Natasha Dalal, on the sixth season of Karan Johar's talk show Koffee With Karan, where he said, "I am dating her and we are a couple...I plan to marry her." In December 2020, while talking to Varun on her radio show What Women Want, Kareena Kapoor called Natasha Dalal his "fiancee," confirming that the duo got engaged last year.

Varun Dhawan and Natasha Dalal's  love story began in school. The couple had a 2020 wedding scheduled. However, they had to change the plan due to the COVID-19 pandemic and the lockdown. Here are some pictures from Varun-Natasha's wedding festivities, which were shared by the actor on social media.