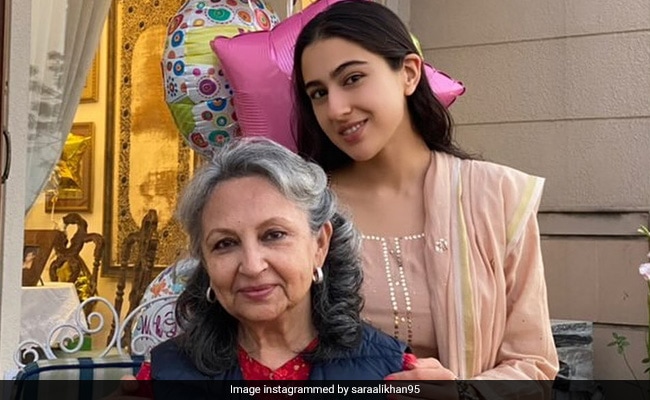 Veteran actress Sharmila Tagore celebrated her 76th birthday on Tuesday and guess who posted the cutest wish for her on social media? None other than her granddaughter, actress Sara Ali Khan. On Tuesday evening, Sara Ali Khan gave us glimpses of Sharmila Tagore's birthday celebrations and also wrote a beautiful note for her "Badi Amman." In the pictures, Sharmila Tagore can be seen wearing a red kurti paired with a sleeveless winter jacket while Sara can be seen sporting a pastel peach sharara suit. "Happy birthday, Badi Amman. Thank you for being my pillar of support, guiding force and inspiration. I love you lots," read Sara's birthday greeting.

Sara Ali Khan is the daughter of Saif Ali Khan with his first wife, actress Amrita Singh. The actor is currently married to actress Kareena Kapoor, with whom he has a son named Taimur. Saif and Amrita also have a son - Ibrahim Ali Khan.

Earlier, while speaking on daughter-in-law Kareena Kapoor's talk show What Women Want, Sharmila Tagore said that she "loves" the way Sara Ali Khan conducts herself during her interviews and added that she is very "proud" of her.

Sara Ali Khan made her debut in Bollywood with Abhishek Kapoor's Kedarnath in 2018. At that time, Sharmila Tagore texted Amrita Singh and expressed how much she is proud of her granddaughter. In an interview with DNA, Sara had said: "Dadi is extremely proud. She is getting a lot of messages from people and she messaged mom which was a big one for me."

Sara Ali Khan will next be seen in Coolie No 1, co-starring Varun Dhawan.