ICYMI: Gigi Hadid Being Her Stunning Self In Viral Maternity Photoshoot 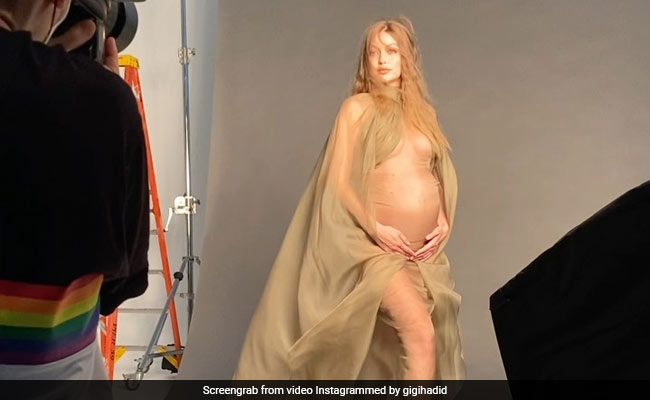 Gigi Hadid in a still from the video. (courtesy: gigihadid)

Any picture with supermodel Gigi Hadid in it looks like a million bucks but these BTS clips from her maternity photo shoot are extraordinary. The BTS videos from the photoshoot were posted by Gigi Hadid on Tuesday but they are trending even two days later and we are not surprised at all, given how stunning she looks in each frame. The supermodel titled the post: "Making of," and accompanied it with a smiley. Gigi, who is expecting her first child with boyfriend and singer Zayn Malik, can be seen sporting three different looks in the BTS shoot. The first outfit happens to be a flowy, beige cape of sorts. In the second look, Gigi can be seen dressed in a white bralet and blue denims. For her third look, she can be seen wearing a white gown with sleek hair.

If we had to sum up her post in a word, we would call it stunning. Check out the post here:

Before Gigi Hadid's maternity photoshoot took over the Internet, the supermodel trended big time for sharing a mushy post for her boyfriend Zayn Malik. Gigi, who could be seen kissing Zayn in the picture, captioned it: "Baby daddy." How cute! Take a look at the post:

Earlier this year, the supermodel made an appearance through a video call on Jimmy Fallon's The Tonight Show, where she confirmed the news of her pregnancy with Zayn Malik. In the video, an excited Gigi said, "Obviously, we wish we could have announced it on our own terms. But we're very excited and happy and grateful for everyone's well wishes and support."

Gigi Hadid, a popular name in the American fashion circuit, has walked the ramp for ace designers like Marc Jacobs, Chanel, Michael Kors, Jean Paul Gaultier, and Max Mara, to name a few.