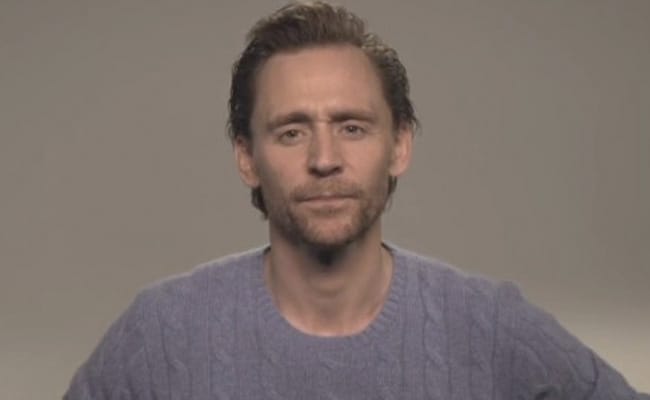 Tom Hiddleston in a still from the interview with NDTV.

Fans of Marvel Cinematic Universe (MCU) and Shah Rukh Khan have been jumping with excitement since actor Tom Hiddleston, who plays the titular semi-villian character of Loki in Marvel films, referred to Shah Rukh Khan, on being asked about India and Bollywood in a promotional video. Now, in an interview with NDTV, Tom Hiddleston recalled watching Shah Rukh Khan's old classic Devdas, when asked about the Bollywood actor. In an interview with NDTV's Rohit Khilnani, Tom said: "I remember it was quite a long time ago now. I remember going to see Devdas. I mean that's quite an old film." He added: "I remember I going to see that at my local cinema, and it was such an extraordinary. I would say I have never seen anything like that. So, yeah I remember that very much."

During the interview, Tom also tried his hands at the iconic Shah Rukh Khan pose and gave it a Loki connection as he said: "Well, I am sitting down but Loki kind of does that too."

As mentioned above, Tom Hiddleston was featured in a promotional video shared by Disney+Hotstar on Twitter earlier this week. In the video, Tom mentioned remembering India through Shah Rukh Khan, when asked about India and Bollywood. The promotional video was about Tom's upcoming web-based series Loki.

Tom Hiddleston's cheekbones and wit cut sharper than glass and we are here for it! Watch #Loki streaming June 9 pic.twitter.com/FodbnUS61j

On Friday, Shah Rukh Khan retweeted the video featuring the "God Of Mischief" and responded to his statements about him. "You are kind, God of Mischief... hope there's no mischief behind this claim though," the 55-year-old actor tweeted. He also expressed his fondness for Tom's on-screen character Loki and said he "can't wait to binge watch" his new series. "Lots of love Tom and can't wait to binge Loki!!! Starting now- Ep 1!" Shah Rukh Khan tweeted.

You are kind, God of Mischief... hope there's no mischief behind this claim though. Lots of love Tom and can't wait to binge Loki!!! Starting now- Ep 1! https://t.co/MFTJBHCtJu

Tom Hiddleston is known for portraying the famous anti-hero character of Loki. He has appeared in several Marvel movies like The Avengers, Avengers: Infinity War and many more. Loki marks the first very own series dedicated just to the Marvel character of the same name. The show began streaming on Disney+ Hotstar on June 9.