Eternals Trailer: The film is set to release in November 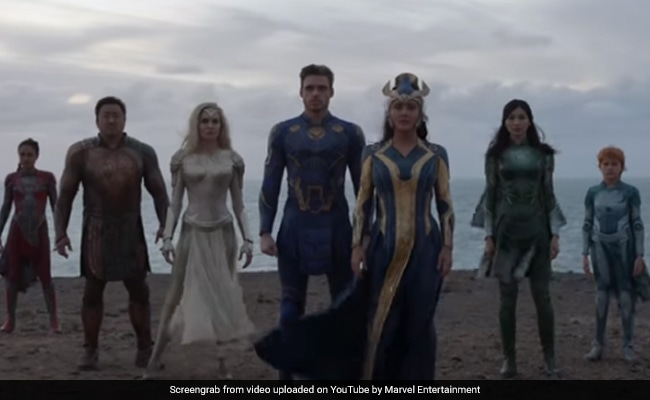 Eternals Trailer: A still from the film.(Image courtesy: YouTube)

Fans of the Marvel Cinematic Universe (MCU) have a reason to rejoice as the much-awaited trailer of the upcoming film Eternals dropped on Monday. The trailer has already sent the Internet into a tizzy. Eternals , which marks the first collaboration between Marvel Studios and the Academy-award winning filmmaker Chloe Zhao, has an impressive star cast featuring Angelina Jolie as Thena, Salma Hayek as Ajak, Don Lee as Gilgamesh, Richard Madden as Ikaris, Brian Tyree Henry as Phastos, Lia McHugh as Sprite, Kumail Nanjiani as Kingo, Gemma Chan as Sersi, Lauren Ridloff as Makkari and Barry Keoghan as Druig. These 10 main characters constitute the Eternals, which is an immortal alien race that was created by the Celestials. All of the 10 members of the Eternals race possess a characteristic cosmic energy which is different from the other members.

Eternals picks up from the events that took place after the Avengers: Endgame . As the trailer begins, the Eternals can be seen secretly living on the Earth. The pack of Eternals is being led by Salma Hayek (Ajak). Throughout the trailer, she can be heard talking about how the Eternals have lived on the Earth for years but have never intervened in human activities "until now." The film will feature the new set of superheroes fighting off their counterparts - Deviants - and protecting humanity. The trailer also features Kit Harington as Dane Whitman, who is a human warrior.

Besides the main star cast, the film also stars Bollywood actor Harish Patel, who is not the only Indian element in the film. We also get a glimpse of Kumail Nanjiani's Bollywood dance sequence and a traditional Indian wedding between Richard Madden (Ikaris) and Gemma Chan (Sersi). These Indian elements from the trailer of Eternals , have left desi fans buzzing on Twitter. Earlier this month, a clip from the film had left fans guessing if it featured Harish Patel in it.

Eternals is slated to release in theatres on November 5 in America, and in October in India.