A Day On Zack Snyder's Army Of The Dead Set: Huma Qureshi "Waiting To Check-In At Zombie Hotel" 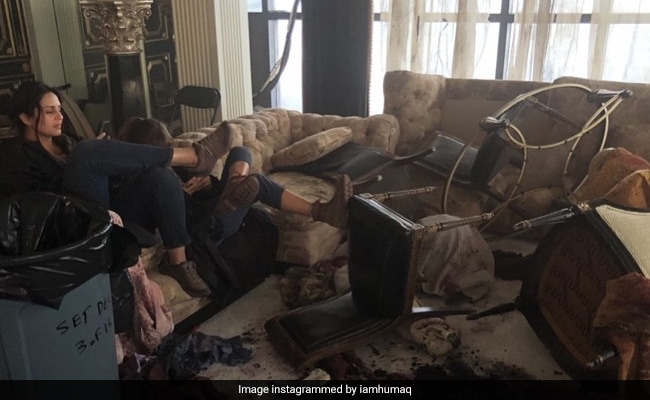 Huma Qureshi has shared a still from her recently released American film Army of The Dead. The actress uploaded a behind-the-scenes snap on Instagram featuring herself. We can spot Huma sitting cross-legged in a messy room full of filth and furniture. “Me just hanging out on the set of Army Of The Dead waiting to check-in at the Zombie Hotel surrounded by zombie entrails... You know, just regular on set Hollywood Glamour,” the caption read. The Gangs of Wasseypur star further brought to notice that her co-star is also present in the frame. Huma added in the note, “And, that is Ella Purnell aka Kate hidden behind my giant shoe... This spectacular film is playing on the big screen (select theatres) in the US right now.” Others can watch the movie on May 21 on Netflix, she informed.

Earlier, Zack Snyder spoke about casting “only Indian actors” in his films after working with Huma. In an interview with Hindustan Times, the filmmaker said, “She was written as an Indian character, and Huma is a really amazing actress, no two ways about it. We talked about who we could get, and the casting director brought her up. I watched some of her material, and I was like, 'this actress is amazing'.” He then added, “I was so happy, and finally, having her on set, she was like, you know, I want only Indian actors in my movies from now on."

Zack Snyder is known for films like Superman, Batman v Superman: Dawn of Justice, Justice League, Legend of the Guardians: The Owls of Ga'Hoole to name a few.

Queen Of Captions, Sara Ali Khan Strikes Back With A "Salty" One