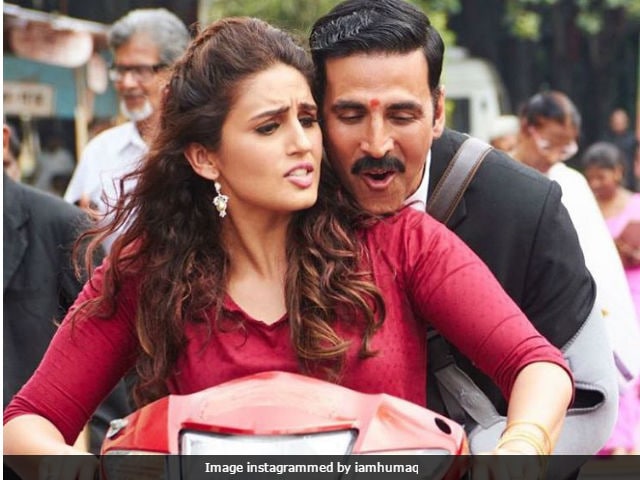 Huma Qureshi and Akshay Kumar will be seen together in Jolly LLB 2 (Image courtesy: iamhumaq)

New Delhi: Huma Qureshi who is awaiting the release of her upcoming film Jolly LLB 2, directed by Subash Kapoor, starring Akshay Kumar, told news agency IANS that she didn't feel her role will get ignored with the Khiladi actor's stardom. The 30-year-old actress was also asked about her equation with her co-star and whether she felt ignored by the Rowdy Rathore actor's presence. "I didn't feel ignored at all," she told IANS. Akshay Kumar who was also present at the event, said: "How can I ignore actresses? Did I ignore my actress in Airlift. In Housefull 3, we had three heroines."

"On the contrary, I made shots for her (Huma) in 'Jolly LLB 2'. I made food for her and used to give her a massage," the actor added.

"Actually he has made this film, so that all the boys run away from my life by proving that she is a dominating girl and forces her husband to do all the work," Huma Qureshi told IANS. She also added that she didn't feel pressurised on being cast opposite an A-list actor. "But I didn't face anything like this (getting ignored by Akshay's part). I love a lot of his films, Airlift being my favourite," Huma said.

Promoted
Listen to the latest songs, only on JioSaavn.com
Jolly LLB 2 is a sequel to the 2013 movie Jolly LLB. The film also features Saurabh Shukla and Annu Kapoor in the lead role. Huma Qureshi was last seen in the 2015 revenge drama film Badlapur. Huma will next be seen in Zahhak, remake of the Hollywood film Oculus, directed by Prawaal Raman, which will also see her brother Saqib Saleem in the lead role. She also set to make her Malayalam debut with Uday Ananthan's White and Hollywood debut with Gurinder Chadha's Viceroy's House