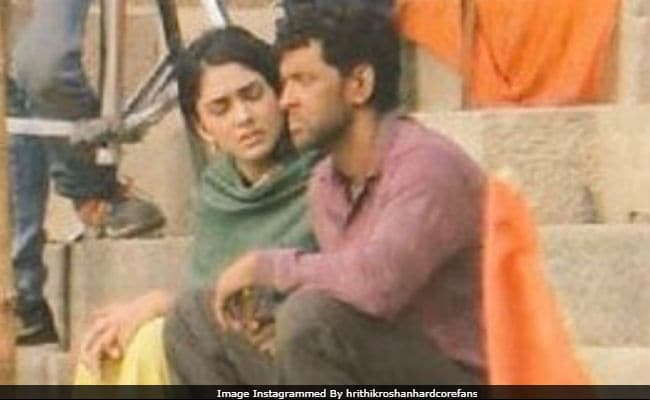 New Delhi: Television actress Mrunal Thakur, best-known for her role in the show Kumkum Bhagya, was spotted on the sets of Hrithik Roshan's Super 30. Hrithik's fan clubs have shared pictures of the actor with Mrunal, which appears to be from a ghat in Varanasi, where Super 30 is currently being filmed. Super 30 is a biopic on mathematician Anand Kumar, the founder of 'Super 30' programme, that trains IIT aspirants in Patna. Vikas Bahl directs the film. A couple of months ago, DNA reported that Mrunal is likely to co-star with Hrithik in the film. "They had reservations about the length of the role, but it is an important part. It's a great thing for a new actress to begin her career with," the report stated.

See pictures of Hrithik and Mrunal on Super 30 sets.

A post shared by hrithik roshan fan club (@hrithikroshanhardcorefans) on Feb 6, 2018 at 7:39am PST

The first look of Hrithik from the film was revealed earlier this week. The look left Twitter as well as Anand Kumar impressed. "I was truly amazed. It felt like reliving my student days walking several years behind. He said that the shooting was about to commence and he wanted my best blessings. I said how could I give my blessings, but my best wishes would always be there," Mr Kumar told news agency PTI.

He also shared Hrithik's look, along with a picture of himself as a student on Facebook.

"I was delighted and pleasantly surprised to see the first look wherein Hrithik sports a rugged, bearded look. I had been told that at present the shooting was being done of my college days. I took out an old photograph of mine, of the time when I was studying at Patna University. I found the resemblance to be uncanny", Anand Kumar said.

Meanwhile, apart from Mrunal, Sara Ali Khan's name had popped up to star in Super 30. Weeks ago, mid-day reported, "Hrithik Roshan is keen that the association materialise. He has pitched her to Vikas. The talks have been initiated." However, there's no confirmation on Sara's casting as of yet.

Promoted
Listen to the latest songs, only on JioSaavn.com
Under the Super 30 programme in Patna, Anand Kumar tutors 30 students from economically weak background for IIT-JEE entrance exams.