We spotted a few interesting comments on Hrithik Roshan's video, one among them is from his ex-wife Sussanne Khan. 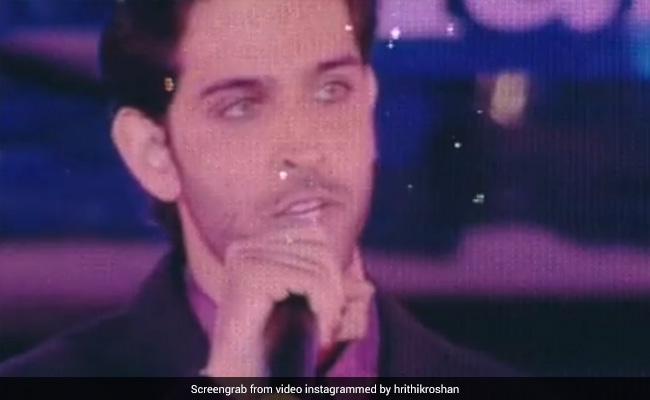 Hrithik Roshan in a still from his video (courtesy hrithikroshan)

Hrithik Roshan, who won the Best Debut Actor Filmfare Award in 2000 for Kaho Naa... Pyaar Hai, shared a nostalgia-dipped video on Instagram. The video is a montage of Hrithik Roshan's Filmfare appearances, which comprises his energetic performances and acceptances speeches. The video begins with a clip of Hrithik Roshan at the Filmfare Awards in 2000, in which he says: "We people believe in only one thing. The show must go on." This is followed by glimpses of Hrithik's energetic performances in the years 2003, 2007, 2012 and 2012. Hrithik Roshan has also performed at this year's Filmfare Awards, which were held in Mumbai on March 27. Bollywood's biggest awards night was a low-key affair this time in light of the pandemic situation. The Filmfare Awards will air on Colors TV on April 11 at noon.

We spotted a few interesting comments on Hrithik Roshan's video, one among them is from his ex-wife Sussanne Khan. She indeed is Hrithik's biggest cheerleader and can't wait to see Hrithik set the screen on fire this Sunday.

Last week, Hrithik Roshan attached a few glimpses of him grooving at the recently held Filmfare Awards. Dressed in his casually charismatic open shirt-and-denims avatar, Hrithik can be seen setting the Filmfare Awards stage on fire in the photos. Choreographed by Shiamak Davar, Hrithik Roshan danced to his popular songs ranging from Kaho Naa... Pyaar Hai's Ek Pal Ka Jeena to Jai Jai Shivshankar from War. "I love dancing," he captioned his post.

In terms of work, Hrithik Roshan was last seen in the blockbuster hit War. The actor will next be seen in Fighter, in which he will co-star with actress Deepika Padukone. Hrithik Roshan also has the fourth instalment of the Krrish series in his line-up.

Kunal Kemmu Spent His Monday Doing Chores. What About You?