Hrithik co-starred with Karisma Kapoor in Fiza, who also featured in a throwback photo on director Khalid Mohamed's Twitter. 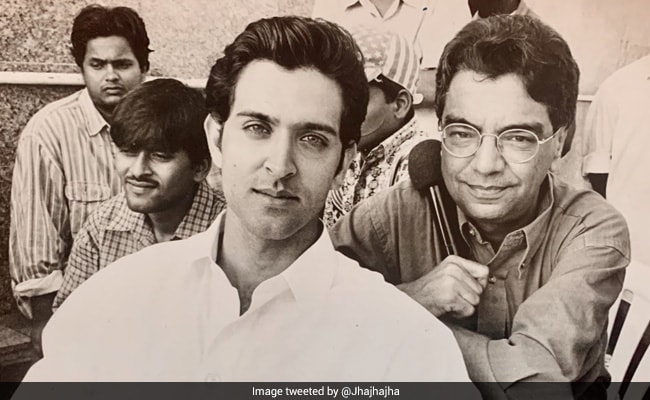 Hrithik Roshan, who made his Bollywood debut with 2000 release Kaho Naa... Pyaar Hai, chanced upon a throwback photo shared by the director of Fiza, his second film. Filmmaker Khalid Mohamed shared a photo from the first day of Hrithik on the sets Fiza and the 46-year-old actor was easily "overwhelmed". Re-sharing the photo of himself dressed as his character Amaan from Fiza, Hrithik revealed that this from is from a time when Kaho Naa... Pyaar Hai was yet to release: "Wow. Overwhelmed looking at this. KNPH hadn't released. Thanks for treating me so kindly on set," tweeted Hrithik. With a reference to the song Piya Haji Ali from Fiza, Khalid Mohammed wrote: "Piya Haji Ali... was first day of shoot with Hrithik Roshan as Amaan in Fiza."

Both Kaho Naa... Pyaar Hai and Fiza released in 2000, with Hrithik becoming a favourite Bollywood newbie. He was also seen in Mission Kashmir the same year, which was critically acclaimed.

Wow . Overwhelmed looking at this . KNPH hadn't released. Thanks for treating me so kindly on set @Jhajhajhahttps://t.co/oZrtEQJbp3

Hrithik co-starred with Karisma Kapoor in Fiza, who also featured in a throwback photo on director Khalid Mohamed's Twitter. The director tweeted the throwback photos to announce Fiza is now available on Netflix.

FIZA streaming on NETFLIX...do have a look. N can say without any doubt that Karisma Kapoor is the best actor I've ever worked with. Spontaneous , she wld grasp the core of every scene instinctitively. pic.twitter.com/EE34drPRB1

Hrithik was directed by his filmmaker dad Rakesh Roshan in Kaho Naa... Pyaar Hai, in which he played dual roles and co-starred with Ameesha Patel, who also made her entry in Bollywood with the movie. Hrithik had extensively worked with Rakesh Roshan as Assistant Directors on his movies. Rakesh Roshan has also directed Hrithik in the Krrish series of movies. In fact, Hrithik will next be filming Krrish 4.