How This Supermodel Transformed Into Princess Fiona For Halloween

If there were a thing called OG of Halloween looks, she would top the list 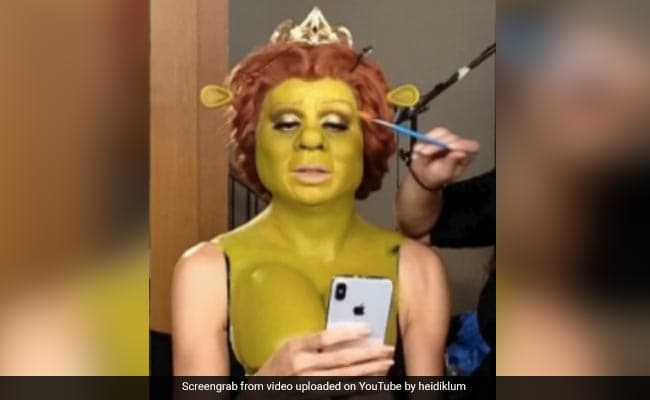 Supermodel Heidi Klum is a chameleon when it comes to Halloween looks. With more than a little help from her exceptional make-up team, she has been serving perfect Halloween looks over the year. It's Halloween month and the supermodel has been marking it by sharing her OTT looks on her Instagram profile - one post at a time. Her latest entry is about her transformation into Princess Fiona. Circa 2018. "Green was always my favorite color... #HeidiHalloween Flashback 2018," she wrote sharing the video. Be it extraterrestrial creatures of animals straight from the jungle - the supermodel has done it all and the transformation keeps getting better, to say the least.

Let's take a look at some of Heidi Klum's best Halloween looks over the years:

A few months ago, Heidi Klum's daughter Leni Olumi Klum, 17 made her big runway debut at the Italian label's Dolce & Gabbana's star-studded fashion show Alta Moda, in Venice. For her big runway debut, Leni looked like teen royalty, dressed in a blue satin ensemble topped with a sequined crown. "Thank you to the whole Dolce and Gabbana's team! You made my first runway show so special," she wrote sharing a BTS picture.

Besides being a supermodel, Heidi Klum features as a judge on the TV reality show America's Got Talent. Heidi and British singer Seal split in 2012 after seven years of marriage. Other than Leni, they are parents to Henry, 15, Johan, 14 and Lou, 11.

"Was Shaking, Dizzy": Gal Gadot Recalls How She Felt When Joss Whedon "Threatened" Her