"Happy Birthday to the love of my life. Life is better with you," wrote Joe Jonas 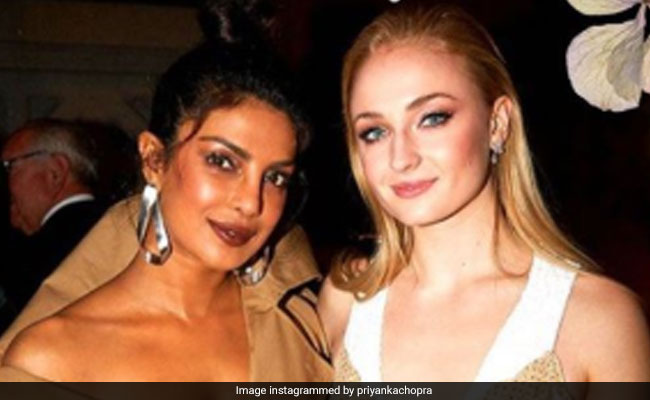 On Sophie Turner's 24th birthday, Priyanka Chopra shared a super cute wish on her Instagram story, on Saturday morning. The Quantico actress shared a throwback picture along with the birthday girl. The aforementioned photograph happens to be from the 2017 Met Gala as Priyanka can be seen dressed in the trench Ralph Lauren gown that she wore to the red carpet event that year. Priyanka captioned the post: "Happy Birthday, Soph! Love you. Hope today is special." Priyanka Chopra and Sophie are married to Jonas Brother stars Nick and Joe Jonas, respectively. "Happy Birthday to the love of my life. Life is better with you," Joe Jonas shared a picture of his wife Sophie on his Instagram profile and wrote. Sophie Turner married singer Joe Jonas in France in July last year. The wedding was attended by the couple's close friends and family members. The couple earlier had an impromptu chapel wedding in Las Vegas, which was officiated by an Elvis Presley impersonator. Check out Joe's post here:

Happy Birthday to the love of my life. Life is better with you.

Sophie Turner is best-known for her role as Sansa Stark in the popular TV series Game Of Thrones. On the work front, she was last seen in the film X Men: Dark Phoenix.

Priyanka will next be seen in Netflix's adaptation of The White Tiger, co-starring Rajkummar Rao. She also has the superhero film We Can Be Heroes and a film with comedian Mindy Kaling in the pipeline. She also has Amazon's web-series Citadel. The actress also announced the "sangeet project" with Amazon Prime.