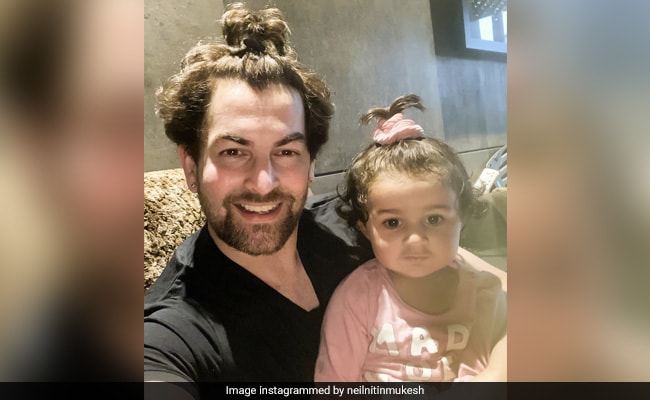 We have a cure for your quarantine blues - Neil Nitin Mukesh's latest Instagram entry. On Tuesday night, the actor posted a super cute picture of himself along with his daughter Nurvi. The 38-year-old actor shared a picture, in which he and his little daughter can be seen sporting the same hairstyle - pony tails. Neil shared the backstory behind the super cute picture. The New York actor had to make a ponytail first in order to convince his little munchkin. "To convince her to make a ponytail, I had to make one first." He added the hashtags #dadysgirl and #myall to the post.

Check out the super cute post here, you can thank us later:

To convince her to make a ponytail, I had to make one first. . #dadysgirl #myall

Nurvi frequently makes appearances on her father's Instagram profile and it is a sheer delight. A few days ago, Neil sent a Navaratri greeting, featuring his little daughter. ICYMI, this is what we are talking about:

Neil Nitin Mukesh and Rukmini Sahay got married in Udaipur in 2017. The couple welcomed daughter Nurvi in September 2018.

On the work front, Neil Nitin Mukesh was last seen in the high-octane action film Saaho, starring Prabhas and Shraddha Kapoor. In 2019, he also featured in Bypass Road, which was directed by his brother Naman.

Neil is the son of Nitin Mukesh and the grandson of the legendary Mukesh. The actor has featured in films such as New York, Lafangey Parindey, Jail, Johnny Gaddaar, 7 Khoon Maaf , Wazir, and Prem Ratan Dhan Payo to name a few.