How Gigi Hadid Is Beating The Summer Heat With Baby Khai 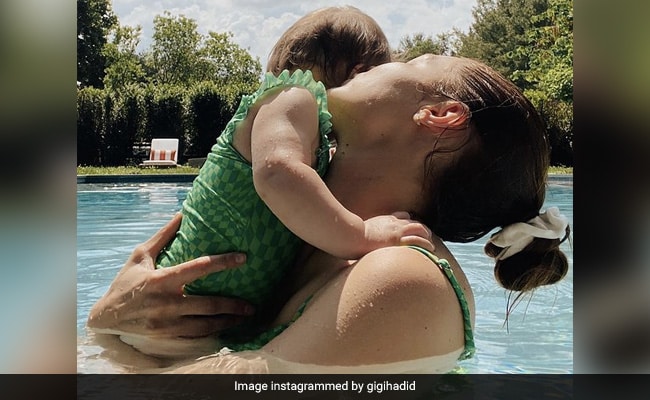 Gigi Hadid lit up Instagram on Thursday with adorable pictures of herself and her baby daughter Khai. Gigi welcomed her first child with her boyfriend, singer Zayn Malik, in September last year. In her latest Instagram entry, the supermodel can be seen soaking up the sun in a pool with her daughter. The mother-daughter duo can be seen twinning in green outfits. In one of the images, baby Khai looks cute as a button as she plays while sitting on a sheet laid out on the grass with her back towards the camera. Sharing the pictures, Gigi Hadid wrote: "Inhale summer" with a bright sunny icon.

Gigi Hadid's Instagram feed is filled with stunning pictures from her maternity diaries. Recently, she posted a throwback photo of her baby bump and wrote: "This week, last year."

We are all hearts for this photo of Gigi Hadid and Khai:

In September, Gigi Hadid and the singer announced the good news on social media with adorable posts. While the supermodel posted a super cute photo of her newborn daughter's tiny fingers clutched onto her own and wrote: "Our girl joined us earth-side this weekend and she's already changed our world. So in love," Zayn Malik's caption read: "Our baby girl is here, healthy and beautiful. To try put into words how I am feeling right now would be an impossible task. The love I feel for this tiny human is beyond my understanding. Grateful to know her, proud to call her mine, and thankful for the life we will have together."

Gigi Hadid, a supermodel who has appeared on several prominent magazine covers, has walked the ramp for ace designers like Chanel, Marc Jacobs, and Jean Paul Gaultier among many others.