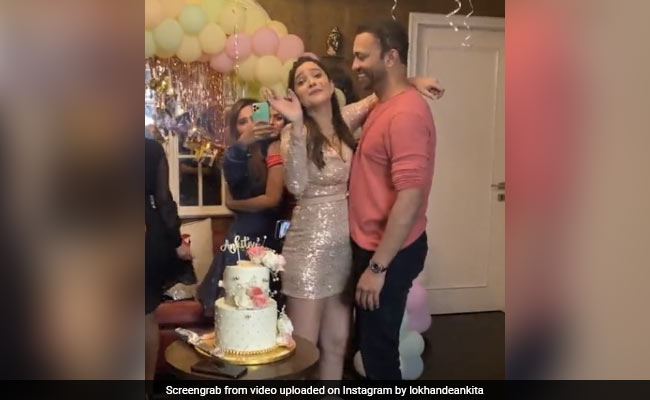 Ankita Lokhande occupied a spot on the list of trends, courtesy a video, which happens to be from her birthday party. Ankita, who celebrated her 36th birthday on Saturday, shared a video from her birthday bash, which was attended by her boyfriend Vicky Jain, and a few close friends from the TV industry including Rashami Desai, Aparna Dixit among others. For her special day, Ankita Lokhande picked a golden sequined dress and she looked stunning as ever. The actress' parents were also present at the birthday party. Sharing a video from the party, Ankita wrote: "Birthday celebration... Thank you everyone."

On Saturday, the actress shared pictures from her early birthday celebrations and she wrote: "Wishes and dreams."

The actress also celebrated her birthday with underprivileged kids and shared a video on Instagram. "The giving of love is an education in itself," she wrote.

Last year, Ankita Lokhande made her Bollywood debut with Kangana Ranaut's period-drama Manikarnika: The Queen Of Jhansi. She also starred in Baaghi 3, which featured Tiger Shroff in the titular role. Ankita Lokhande was also a participant in TV reality shows like Jhalak Dikhhla Jaa and Comedy Circus.