Saif Ali Khan counted many of Kareena's qualities and shared the advice he gave Sara, who is debuting in Bollywood this year 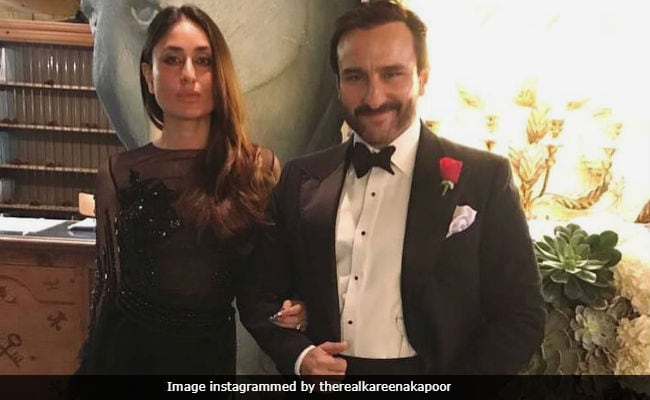 New Delhi: Saif Ali Khan, star of this week's Kaalakaandi, says his wife Kareena Kapoor has many 'adorable qualities.' Speaking to news agency IANS, Saif said: "There are so many adorable qualities about her (Kareena) like time management, organization, fitness, discipline and she is very patient also." Saif Ali Khan married Kareena in 2012 and the couple are parents to one-year-old Taimur. Kareena and Saif have co-starred in films like Tashan, Kurbaan and Agent Vinod, which was also their last film together. Kareena is busy filming Veere Di Wedding these days while Saif's Kaalakaandi releases on January 12.

Saif is not just looking forward to the release of Kaalakaandi but also his daughter Sara Ali Khan's Bollywood debut Kedarnath. "I have given her so many pieces of advice. I told her to be honest and to find what is special inside her and not to be like other people. She understands all of this. She always wanted to be an actor and I think she will be great," he told IANS.

Sara's Kedarnath is directed by Abhishek Kapoor and also stars Sushant Singh Rajput. "We worry about children as this profession has so much drama to it. So I had thought she will do some normal job because she is brilliant student, but I guess nobody wants that (normal job)," Saif told IANS.

Saif Ali Khan's last few films such as Chef and Rangoon failed to perform at the box office but the actor told IANS that he 'performed better than before' in these films. "As far as my acting journey is concerned, in these 25 years, it has been interesting, full of ups and downs and learning constantly. I think from last year, I gave more thought to acting than before. My last year's films like Rangoon, Chef and now Kaalakandi are better performances than before," he told IANS.

"My upcoming film Baazaar is also very commercial film but I think its good work and it will be interesting. I am playing slightly dangerous guy in it so it will be fun," added Saif.

Promoted
Listen to the latest songs, only on JioSaavn.com
Kaalakandi also stars Akshay Oberoi, Deepak Dobriyal and Amyra Dastur. It is directed by Akshat Verma.