Housefull 4 song Chammo will leave you asking for more 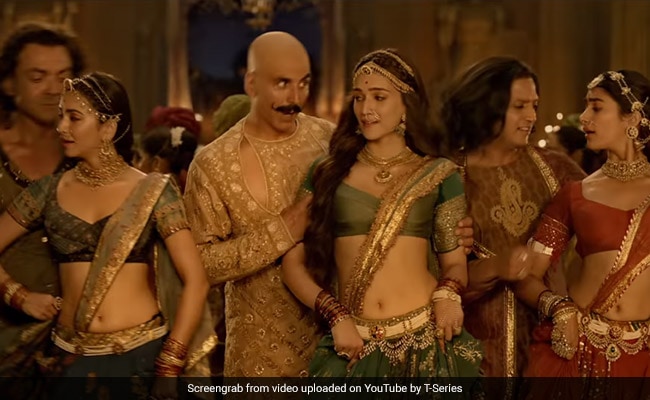 A still from the song Chammo. (Image courtesy: YouTube )

The makers of Hosuefull 4 released a brand new song from the film and it is trending incessantly, especially on Twitter. The song that features the entire cast of the film, showcases the celebrations taking place in the Sitamgarh kingdom in 1419. In the song, Madhu (Kriti Sanon) - Bala (Akshay Kumar), Mala (Pooja Hegde) - Bangdu Maharaj (Riteish Deshmukh), Meena (Kriti Kharbanda) - Dharamputra (Bobby Deol) can be seen expressing their love for each other. The song has a grand set and all the actors and actresses can be seen dressed in traditional outfits. The song also has several comic elements.

Chammo has been sung by several singers including Sohail Sen Featuring Sukhwinder Singh, Shreya Ghoshal and Shadab Faridi. It has been composed by Sohail Sen and the lyrics are by Sameer Anjaan. The video has over 4 lakh views on YouTube.

Housefull 4 is the fourth installment of the popular comedy Housefull series. The film has been directed by Farhad Samji and it has been produced by Sajid Nadiadwala. The film also stars Rana Daggubati, Johnny Lever and Chunky Panday in pivotal roles. It is slated to release on October 25 this year. It will clash with Rajkummmar Rao and Mouni Roy's Made In China at the box office.