Holi 2021: Priyanka Chopra Celebrates With Husband Nick Jonas And Her In-Laws In London

"Hope we can all celebrate it with our loved ones, but in our homes," wrote Priyanka Chopra 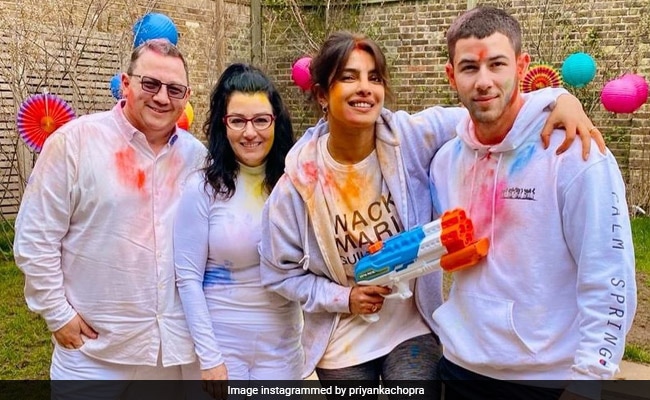 Priyanka Chopra, who is currently living in London with her husband Nick Jonas, opted for low-key Holi celebrations along with Nick Jonas' family this year. She celebrated Holi there along with her father-in-law Paul Kevin Jonas Sr and her mother-in-law Denise Miller-Jonas. Sharing a set of happy pictures from the festivities, Priyanka wrote: "Holi, the festival of colours is one of my favourites. Hope we can all celebrate it with our loved ones, but in our homes. Happy Holi everyone." Nick Jonas also shared the same pictures from the celebrations on Instagram and he wrote: "Happy Holi! From our family to yours."

Comedian-actor Mindy Kaling, who will soon co-star with Priyanka Chopra in a wedding comedy, commented on the actress' pos. She wrote: "I remember being so excited for your Holi party in 2020... And then the world got shut down. Holi 2022 perhaps."

The actress loves to go big on festivals. Be it Diwali, Halloween, Karwa Chauth, Christmas or Thanksgiving. She shares loved-up pictures with her husband from the festivities. Take a look at some of the posts shared by the actress here: