"My first Holi! (five days early) So much fun celebrating with such incredible people here in my second home in India," wrote Nick Jonas 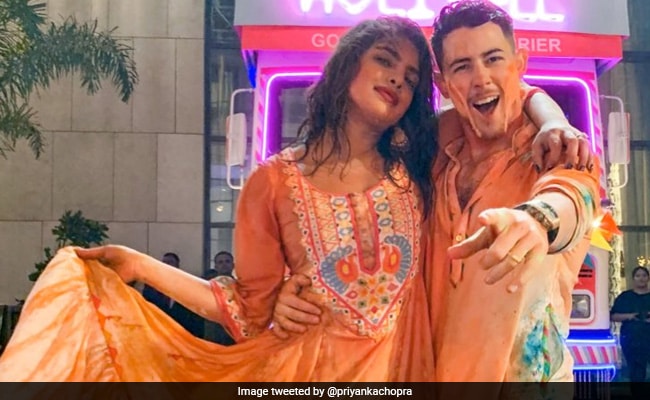 Nick Jonas celebrated his first ever Holi at Isha Ambani's Holi party on Friday evening and had a blast. Guiding Nick though the Holi rituals was wife Priyanka Chopra, who is one of Isha Ambani's closest friends. The morning after, both Nick and Priyanka filled up their social media with colourful photos from last evening and they are making us wish only if we could also be part of the Holi party! Priyanka shared a few fun-filled photos from the Holi bash, in which they had their faces painted with colours, and wrote: "And that's how it's done!" How cute!

And that's how it's done!#Holi2020@nickjonaspic.twitter.com/15BhpaXUF8

Meanwhile, here's what Nick Jonas had to say about Holi in India. Nick and Priyanka hung out with Katrina Kaif and also Vicky Kaushal (who Katrina is rumoured to be dating) at the party. "My first Holi! (five days early) So much fun celebrating with such incredible people here in my second home in India."

My first Holi! (Five days early) So much fun celebrating with such incredible people here in my second home in India. #holipic.twitter.com/3psf0CKj3D

Priyanka and Nick, twinning in Abu Jani Sandeep Khosla ensembles, opted for a photoshoot ahead of joining the Holi party. The couple were joined by Priyanka's mother Madhu Chopra, brother Siddharth Chopra, his rumoured girlfriend Neelam Upadhyaya and BFF Tamanna Dutt and her husband Sudeep Dutt.

Holi came early for us this year.. so much fun celebrating it with friends & family back home.
Thank you Isha & Anand for such a fun time. Adore u! pic.twitter.com/nfICex1Kpn

There's no end to Nick and Priyanka's PDA on Twitter:

She makes me smile a lot. #holipic.twitter.com/UcdV4pDXOc