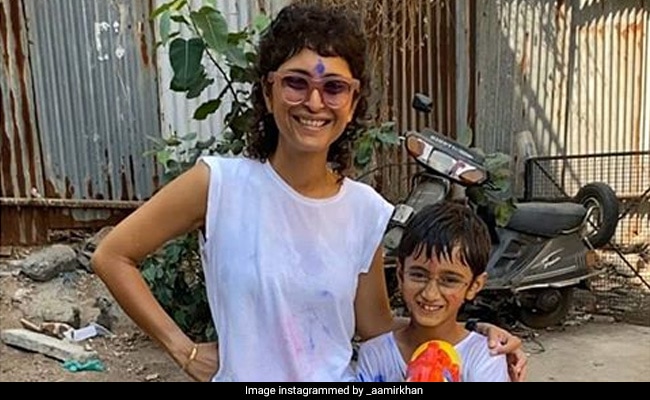 Aamir Khan just made our day a whole lot of better by sharing adorable pictures of his filmmaker wife Kiran Rao and son Azad playing with colors on Holi. Joining the list of celebrities who have been posting pictures form their Holi celebrations, Aamir Khan Instagrammed two photos and wished his fans like this: "Holi Mubarak, guys.Love." In the first picture, Kiran Rao can be seen posing with Azad, who can be seen holding a pichkari while the second photo features the little munchkin having a colourful time with his friends (standing behind him). The mother-son happily posed for the camera (and in this case, we assume that the cameraperson is none other than Aamir himself).

Check out the adorable pictures here:

Aamir Khan was previously married to Reena Dutta, with whom he has a daughter named Ira Khan and a son named Junaid. The actor married Kiran Rao in 2005 and the couple welcomed their son in 2011.

On the work front, Aamir Khan was last seen in the 2018 film Thugs Of Hindostan, which failed to fare well at the box office. He co-starred with Amitabh Bachchan, Katrina Kaif and Fatima Sana Shaikh in the film. Aamir will next be seen in Lal Singh Chaddha, which is a remake of the 1994 film Forrest Gump, which featured Tom Hanks in the lead role. The film, directed by Advait Chandan, also stars Kareena Kapoor in a pivotal role. Lal Singh Chaddha is slated to open in theatres on December 25.