"The hair takes me halfway there," wrote Mandira Bedi 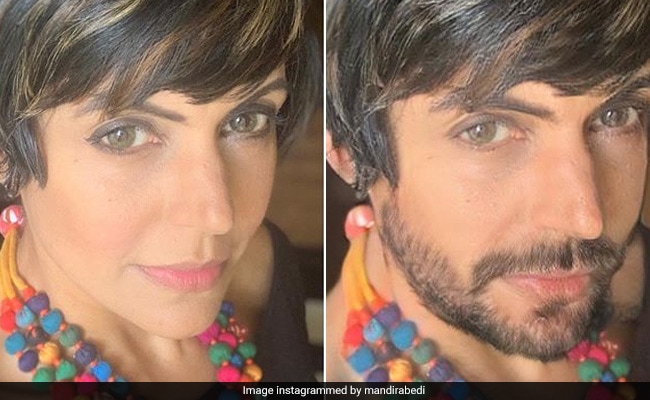 Mandira Bedi, on Tuesday, shared a hilarious post on her Instagram profile and it is cracking up her Instafam. Mandira used a photo editing application to edit her face to that of a man with moustache and beard and shared the picture as a collage with one of her selfies. Sharing the picture collage, Mandira accompanied it with an equally hilarious caption: "I think I might make a better looking man." Referring to her short hair, Mandira added, "The hair takes me halfway there! Hahaha." LOL. Take a look at Mandira Bed's hilarious picture collage here:

I think I might make a better looking man!! The hair takes me half way there!! Hahahahahahaha

Within minutes, Mandira's picture was flooded with comments from her friends and family. Reacting to the picture, actress Mouni Roy commented, "I miss you so bl**dy much."

Mandira Bedi keeps her fans amused with pictures of herself on her Instagram profile. A few days back, Mandira shared this hilarious video of herself jumping on a trampoline with her son Vir. "Sometimes the situation can make you stir crazy and it's nice that exercise happens along the way," wrote Mandira and added the hashtag #janglee to her post.

Sometimes the situation can make you #stircrazy.. And it's nice that exercise happens along the way! #janglee

Here's a throwback picture of Mandira Bedi where she referred to herself as a "toothy weirdo." "On another note... this toothy weirdo seems to have plenty to smile about," Mandira Bedi captioned the picture.

On another note.. this toothy weirdo seems to have plenty to smile about! #throwback

Mandira Bedi, who had a rocking career in modelling before she made her Bollywood debut with the 1995 film Dilwale Dulhania Le Jayenge, was last seen in the 2019 action-thriller Saaho. Mandira Bedi has also featured in television shows like CID, 24 and Kyunki Saas Bhi Kabhi Bahu Thi and is best-known for her titular role in Shanti.

Parineeti Chopra, On Brother Shivang's Birthday, Found The "Best" Pic Of Them. Umm...