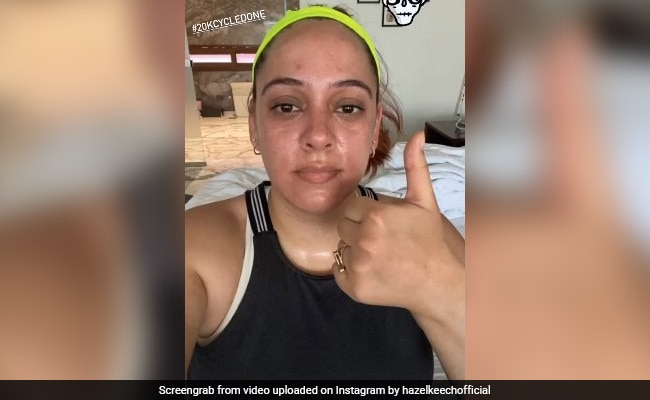 Hazel Keech shared this on her Instagram story (courtesy hazelkeechofficial)

Actress Hazel Keech, who recently wrote about starting exercising "from scratch", shared a purple-faced and exhausted-looking selfie on her Instagram story. She added an ROFL caption to describe her photo, revealing the reason with gifs and a hashtag. "I've found a new shade of tomato red. It's called purple," Hazel wrote for her selfie and added this hashtag to it: "#20kmcycledone." Hazel may be tired and tomato red-faced but she's still high in spirits as she flashed the victory sign. LOL. That's some major cycling motivation, folks. Here, take a look at Hazel Keech's Instagram story here: 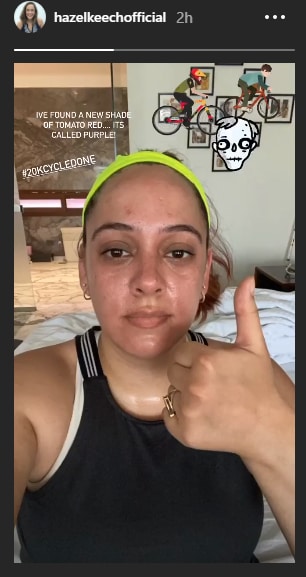 Last month, Hazel wrote a lengthy note about re-starting her exercise schedules after a long gap - she underwent nose surgery last year. She wrote about having "struggled" during months of "recovery": "Just what the doctor prescribed! A dose of happiness mixed with rain and cycling! I'll be honest, although I'm smiling in this photo, I was also dying," she captioned her post from her first day of cycling after a hiatus. "It's been a very long road of recovery for me over many months and this is the first day I am exercising, which means this was a real struggle. But I also know, like anyone else who has to start from scratch again, that this will most likely be the hardest day," she added in her post.

Just what the Dr prescribed! A dose of happiness mixed with rain and cycling! Ill be honest, although Im smiling in this photo, I was also dying. Its been a very long road of recovery for me over many months and this is the first day I am exercising, which means this was a real struggle. But i also know, like anyone else who has to start from scratch again, that this will most likely be the hardest day. Proud of myself today. Thank you @pumaindia for the motivation, support and encouragement

In April last year, Hazel Keech revealed she had been MIA on social media because of a nose surgery. Hazel revealed that she had a nose surgery earlier that year after experiencing difficulty in breathing for a prolonged period. In her post, Hazel wrote, as a result of the surgery, she hasn't been able to work-out and gained a few extra kilos - something that made her avoid posting pictures of herself on social media.

I've not posted in a while so i thought i would fill you in on where Ive been hiding (those of you who were wondering)... A month ago i had a surgery to fix my nose- for as long as i can remember ive struggled to breath through my nose, although not a serious health issue, a chronic one that i just learnt to live with... Lucky enough for me it annoyed my mother-in-law so much that she finally took me to a hospital, ???????? because of which we came to know just how much internal damage there was and understood the problem! So thanks to her i have a new nose????????(internally) and for the first time in my life i can now breath freely and easily. Due to the surgery i've not been active or able to exercise yet, so I've put on some weight hence staying away from social media! But fuck it, here i am, better than ever, breathing happily, all thanks to my mother in law who's receiving blessings from me everyday because finally, finally I CAN BREATHE!!!! It goes to show you, you never know what can lead to where, the things we live with and consider "normal" and sometimes it takes annoying someone to have the best outcome!!!! Love you Shabo! Happy belated mothers day ❤️

Last year, Hazel Keech had also opened up about battling depression and bulimia (an eating disorder) a decade ago in her post about the #10YearChallenge.

Here is my #10yearchallenge 22 years on the right VS almost 32 years on the left.... and how far I've come! I was battling depression, starving myself, had bulimia, dyed my hair dark and kept it long trying to fit in a please everyone around me but hiding all the pain with a smile and joke so no one knew. Today, i can confidently talk about what I've gone through, i dont care what others think of me, i finally had the courage to cut my hair, i dont try and fit in anymore and i am happier, healthier and more at peace with myself than i ever imagined i could be! Wahooo #personalcelebration thanks whoever started the 10 year challenge ❤️

Gullak 2 Review: It's Easy To Fall In Love With The Mishras, Warts And All