The actress shared a photo where she is resting on her sofa, upside down 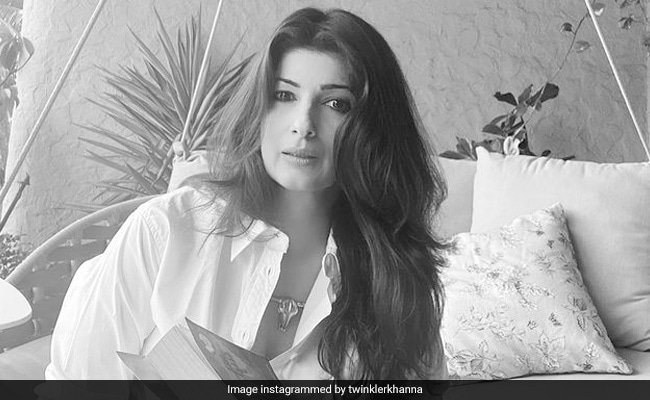 Twinkle Khanna has a way with words and this allows her to explain the most complex of life lessons in the simplest of ways. And this time around, the author and former actress had a piece of fun-filled advice to give her fans. Sharing a photo in which she is seen laying on a sofa with her leg up and head towards the floor, Twinkle shared an interesting take on seeing things the right way. She can be seen reading a book in the photo. In her caption, she said, "Sometimes you have to be upside down to see things the right side up!" adding the hilarious hashtag "Baba Twink Dev".

We were, however, unable to catch a glimpse of the author's face in the photo as it didn't make it to the frame. But the caption and the rest of the image had all the trademarks of a witty Twinkle Khanna quip. Fans of Twinkle seemed to have loved the message as they flooded the comment section with positive responses and laughing emojis.

Twinkle Khanna's Instagram is a treasure trove of funny and witty captions. Even on the occasion of her mother, Dimple Kapadia's birthday, the actress did not forget to add a tinge of humour to her special note. "A certain someone photobombing our lovely birthday picture!  Mother meanwhile is taking each year and turning it backwards like it's a Nolan movie," she wrote. Interestingly, Dimple played a pivotal role in Christopher Nolan's Tenet.

The former actress is also unafraid of making fun of herself. Recently, the actress shared an image of herself where her daughter Nitara had painted on Twinkle's face. Despite Nitara choosing to given Twinkle a makeover with overdrawn eyebrows that were shaped to form a unibrow, black stains on her cheeks and a generous amount of blush, the doting mother smiled for the camera and needless to say, won the hearts of her followers on Instagram.

In another photo, she also praised children around the world for embracing the challenges that came with the pandemic. Sharing a photo of her daughter, she wrote, "The new normal: The balcony is becoming a forest and all our kids are turning into masked Superheroes! I marvel at how they have adapted to just slipping on a mask as they leave the door, the lack of fuss over their isolation..."

Twinkle Khanna is the daughter of legendary actor Rajesh Khanna and actress Dimple Kapadia. She made her Bollywood debut in the 1995 movie, Barsaat, opposite actor Bobby Deol. She married actor Akshay Kumar, following which the actress switched to interior designing and writing. The couple has two children. She has authored books such as Mrs Funnybones, Pyjamas are Forgiving, and The Legend of Lakshmi Prasad.