Rishi Kapoor's role in the film was later taken up by Paresh Rawal. 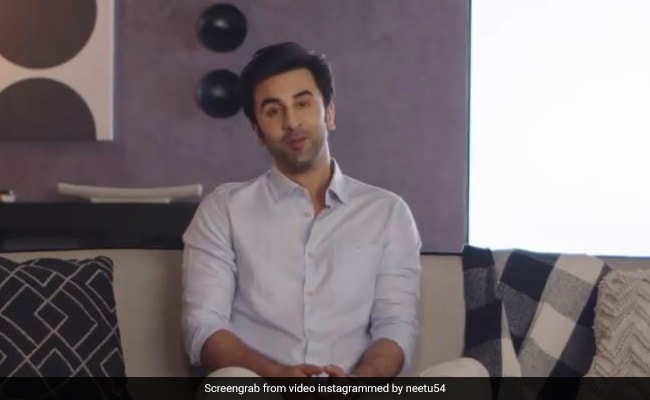 Sharmaji Namkeen: Ranbir Kapoor in a still from the video (Image courtesy: neetu54)

Rishi Kapoor's last film could have been an incomplete masterpiece. But that's not the case. Filling his role in Sharmaji Namkeen, Paresh Rawal made this movie a possibility after Rishi Kapoor's death. The trailer will be out soon. And, to announce this on social media, the Kapoor family has teamed up in quite an unusual way. Neetu Kapoor, Rishi Kapoor's wife, has shared a video where their son, actor Ranbir Kapoor gives us an insight into how this film was made. He begins by saying, "Hi. I am here to share something that makes Sharmaji Namkeen a very special movie. Yeh film mere liye khaas sirf iss liye nahi hai kyuki yeh mere papa ki last film hai. But papa really believed in the story [This film is special for me not only because it's my dad's last film but also because he really believed in the story]."

Ranbir Kapoor goes on to say, "Mujhe yaad hai ki jab shoot ke beech mein papa ki tabiyat kharab hui the, tab woh chahte the ki kisi tara film complete ho jaye. But life had other plans. Kehte hai na, the show must go on. Apne yeh suna hoga but I have seen my papa live this line. Unke jane ke baad ek pal ke liye laga ki shayad film puri nahi hogi [I remember when dad got sick during the shoot, he wanted tp wrap the film. But as they say, life had other plans. You must have heard this line but dad lived it. We thought the film won't get completed]."

Ranbir Kapoor adds how the team speculated the use of VFX or prosthetics on Ranbir's face to complete the movie. "But nothing was working out," he says. Thanking Paresh Rawal for taking up the role, Ranbir says, "It was very generous of him to take up this challenge kyuki ek character ko do alag actors play kare, film world mein yeh bohot hi rare hai. Thanks to Paresh ji hum papa ki last film ko pura kar paye aur aap sab logo tak yeh film pohucha paye(It was very generous of him to take up this challenge because it's very rare to see two actors playing the same role in movies. Thanks to Paresh ji that we could complete dad's last film)." He continued, "It will always be one of my fondest memories of my father. Up there on the screen, bringing a smile to his countless fans. I hope ap sab bhi iss movie ko utna pyaar de jitna unko humesha diya hai. Kal Sharmaji Namkeen ka trailer ayega. Dekhiyega zaroor. (Hope you all shower as much love to this film as you showered on dad. Trailer release tomorrow. Do watch)."

Neetu Kapoor captioned the video, "This movie will always be very close to my heart.I witnessed the excitement when he started the movie and how keen he was to complete it after the treatment. Here's a special message for a very special film." Daughter Riddhima Kapoor Sahni called it "beyond special" in the comment space. She has also added red heart emojis to the post. Next, in line was Alia Bhatt. She has dropped some red hearts. Alia's mom, veteran actress Soni Razdan said, "Truly amazing and so moving."

Sharmaji Namkeen, directed by Hitesh Bhatia, focuses on the life of a retired man who discovers his passion for cooking after joining a women's kitty circle.  Juhi Chawla and Satish Kaushik are also part of the film. It is scheduled to release on March 31.