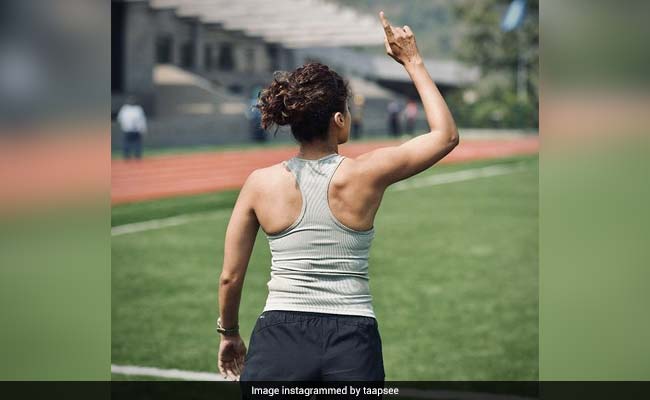 Taapsee Pannu is on cloud nine with all the love coming her way, courtesy of her next film Rashmi Rocket. In the movie, the actress is playing the role of a track athlete whose life takes a turn after she is made to undergo a gender test. However, since her look in the film was revealed, the actress has received a  bunch of comments that called her a "mard ki body wali ladki [woman with a man's body]." Now, following the release of the trailer, the actress has dedicated a tweet and a video to the unsavoury comments directed at her.

Heartfelt thank you
From yours Truly.
But there are many women who actually hear this daily for no fault of theirs.
An ode to all the athletes who give their sweat and blood to the sport and their nation and still get to hear this. #RashmiRocket#AbUdneKaTimeAaGayaHaipic.twitter.com/ASTJ2UdkZc

The powerful video and tweet come days after a publication shared Taapsee Pannu's photo with the caption, "Guess who?" and a Twitter user commented on her “manly” physique. The user said, "Ye mard ki body wali sirf Taapsee hi ho sakti hai. [This manly physique can only be Taapsee Pannu's.]”

Reacting to the tweet then, Taapsee Pannu had said, “All I will say is...Just remember this line and wait for September 23. And advance mein Thank you, I really worked hard for this compliment." Well, it looks like Taapsee kept her promise and came up with a powerful response in the form of her trailer and now, the tweet.

All I will say is…. Just remember this line and wait for 23rd September :)
And advance mein THANK YOU I really worked hard for this compliment ???????? https://t.co/O5O8zMRzP0

Taapsee Pannu also posted a behind-the-scenes photo of herself on the running track. The monochrome image shows her in a tank top and shorts, looking fit as ever. In the caption, Taapsee wrote, “Had I known this amount of love will come in I would've kept this expression more constantly on track.” Writer Tahira Kashyap replied with a heart emoji. Several fans also referred to how fit the actress looks in the image. “Look at those strong toned legs,” said one user. Take a look at the image here.

Even before the audience was introduced to the trailer of Rashmi Rocket, Taapsee Pannu received praise for her fit physique. The actress shared images of her look for the film on Instagram. In one such photo, Taapsee is standing with her back facing the camera. In the caption, she wrote in Hindi, “Bahut sar pe chada rakha hai ise, kisi ki nahi sunti, par khud ki sunti hai, bahut badi baat hai [She has been overindulged, she does not listen to anyone. But she listens to herself, which is a tremendous feat].” She also added the hashtag, “calm before the storm.” Here is the photo we are talking about.

It looks like Taapsee Pannu is ready to give it all, for her roles. In addition to transforming her body for Rashmi Rocket, Taapsee was recently also seeing getting drenched in the rain for a scene in Blurr. “Not the person who enjoys being in the rain. More like someone who enjoys just seeing the rain. Things you do for the love of your job,” Taapsee wrote about the film, which is also the first movie she is producing under her banner Outsider Films. The picture is here.

Rashmi Rocket is directed by Akarsh Khurana and co-produced by Ronnie Screwvala, Neha Anand and Pranjal Khandhdiya. The film will release on Zee5 on October 15.