On a Saturday morning, the actress gave an insider’s view of her family’s rich legacy by sharing a vintage photo of her grandfather with his wife Krishna Raj Kapoor 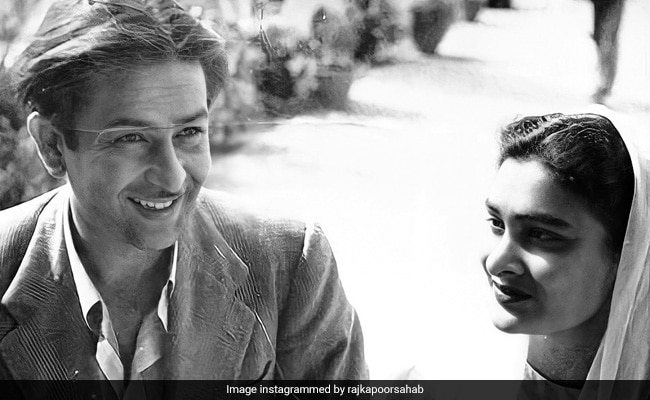 It is a well-known fact that actress Karisma Kapoor comes from the illustrious Kapoor family that has been a part of the Hindi film industry for four generations now. While her great-grandfather Prithviraj Kapoor was a prolific filmmaker and actor, her grandfather Raj Kapoor is considered to be the greatest showman of Indian cinema. On a Saturday morning, the actress gave an insider's view of her family's rich legacy by sharing a vintage photo of her grandfather with his wife Krishna Raj Kapoor. Sharing the image of her Instagram Stories, she wrote, “Dada and dadi,” followed by a heart emoji. In the photo, the actor and his wife are seen holding flower garlands in their hand.

Karisma often shares such throwback pictures of her family on social media. After her uncle Rajiv Kapoor's death in February this year, the actress posted an image featuring her grandfather, father Randhir Kapoor and uncles Rishi Kapoor and Rajiv Kapoor. The photo was originally posted by her sister, actress Kareena Kapoor Khan. The caption read, “Broken but strong.” Rishi Kapoor passed away due to cancer in April 2020.

On the occasion of Raj Kapoor's birth anniversary, Karisma had shared another heartwarming photograph of herself as a child having an animated discussion with her grandfather. She is seen sitting comfortably in his arms. Along with the image, she wrote, “So many learning's from my dadaji…Remembering you on your birthday...”

In addition to Karisma, Raj Kapoor's other grandchildren including Kareena and Ranbir Kapoor have made a mark for themselves as actors in Bollywood. Raj Kapoor is known for iconic films such as Awaara, Shree 420, Mera Naam Joker, Jis Desh Men Ganga Behti Hai among others. He was nominated twice for the Palme d'Or grand prize at the Cannes Film Festival. He was nominated for the films Awaara and Boot Polish.