"All my favourites in a picture," wrote Kareena Kapoor 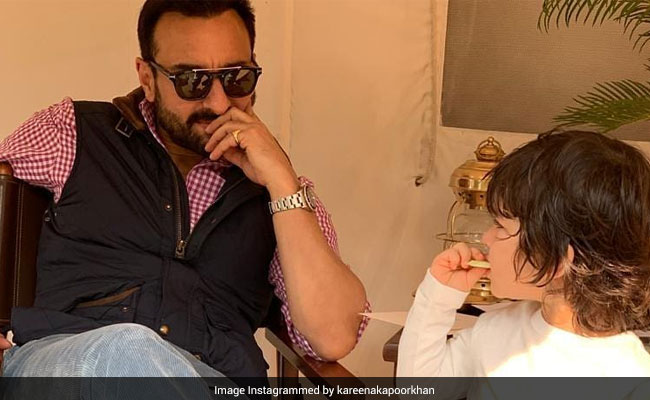 Kareena Kapoor shared two posts on father's day, and both are super adorable. One picture features Kareena Kapoor's husband Saif Ali Khan and their son Taimur while another picture features Kareena's parents, Randhir Kapoor and Babita. In the picture, Saif and Taimur can be seen looking at each other. Sharing the cute snippet of their father-son time, Kareena accompanied it with an equally adorable caption: "He'll always have your back, Tim." She also added the hashtag #happyfathersday to her post. In the other picture, Randhir Kapoor and Babita can be seen having ice cream as they pose for the camera. Sharing the picture, Kareena wrote, "All my favourites in a picture... And I wasn't talking about the ice cream." Aww. Take a look at Kareena Kapoor's posts here:

He'll always have your back Tim... #HappyFathersDay

All my favourites in a picture... And I wasn't talking about the ice cream #HappyFathersDay

Kareena Kapoor keeps sharing adorable pictures of Saif Ali Khan and Taimur on her Instagram profile. A few days back, Kareena treated her Instafam to an adorable picture of Taimur chilling on his dad Saif's back. "Saif said I always got your back... Tim took it literally," Kareena captioned the picture.

Saif said, "I always got your back"... Tim took it literally #FavouriteBoys #QuarantineMornings

The one where Saif Ali Khan gave a haircut to Taimur.

Kareena Kapoor is the daughter of Randhir Kapoor and Bobita. They are also parents to Karisma Kapoor. Kareena Kapoor got married to Saif Ali Khan in October, 2012. They welcomed their son Taimur in December, 2016.

Kareena Kapoor was last seen in the 2020 film Angrezi Medium where she shared screen space with Radhika Madan and late actor Irrfan Khan. She has Aamir Khan's Laal Singh Chadha to look forward to.