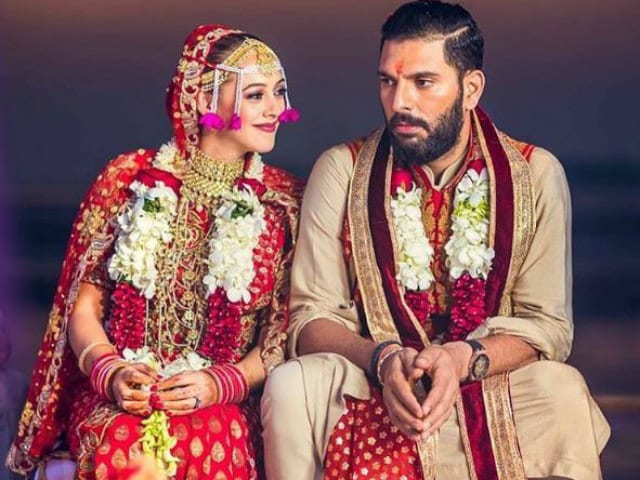 Yuvraj and Hazel at their Goa wedding (courtesy: yuvraj_singh_fan_club )

New Delhi: The 'Yuvraj Hazel Premiere League', starring actress-model Hazel Keech and cricketer Yuvraj Singh, is on its final leg now. The newly-weds continued celebrations with a post-wedding sangeet ceremony on December 6 in New Delhi. Yuvraj and Hazel had a Sikh-style wedding in Chandigarh on November 30 which was followed by a Hindu wedding in Goa. Festivities in Goa were kicked off with a beach-side party on the eve of the wedding. The very Punjabi Chandigarh wedding was preceded by mehendi and sangeet ceremonies on November 29. Celebrities from the world of cinema and cricket joined Hazel and Yuvraj for the celebrations. Virat Kohli and Anushka Sharma, who are reportedly back together, headlined the reception in Goa.

At the Delhi reception, Hazel was stunning in a turquoise lehenga with traditional hairdo and chura on her hands while Yuvraj complemented her in black velvet bandhgala and pants:

An epic night again ! One more to go we can do it @harbhajan3 @shikhardofficial @sachintendulkar @zakkhan34 @hazelkeechofficial

Newly weds couple with Sachin paaji at Reception in Delhi!

Inside Yuvi and Hazel's Goa reception and wedding:

Ceremony 2 is over ! Time to relax@hazelkeechofficial

Yuvi and Hazel let their hair down with a party in the beach destination with friends like actors Ashish Chaudhary and Angad Bedi:

Promoted
Listen to the latest songs, only on JioSaavn.com
Presenting Yuvraj and Hazel's wedding memories from Chandigarh:

A brand new innings! Yuvraj Singh in JJ VALAYA readies for life as a married man! We wish Hazel and him the very best... watch this space for both of them in the finest of our couture for all their functions in the days to follow! #indiancouture #royalnomad #embroidery #exquisite #valaya #jjvalaya #couture #style #highfashion #heritage #refined #elegant #elegance #handmade #handcraftedindia #decadent #regal #indiamodern #glamour #thefutureofthepast #valayacouture #royal #theworldofvalaya #embroidery #fashion #indianfashion #opulence #theranasofkachch #thenewtradition #luxury #sikhchic