Hawkeye Trailer: Jeremy Renner And Hailee Steinfeld's Powerful Performances Will Keep You Glued To The Screen 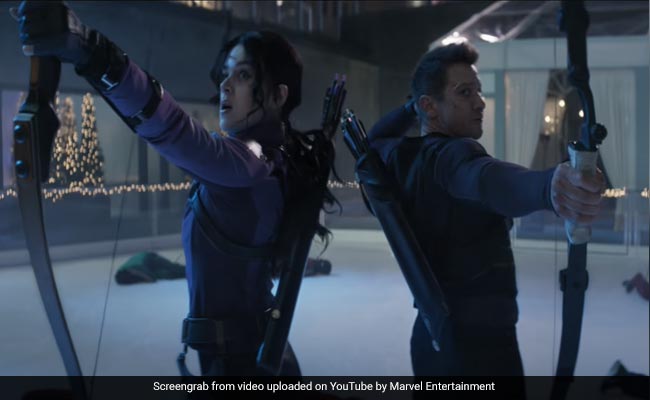 Hawkeye Trailer: Jeremy and Hailee in a still from the series. (Image courtesy: YouTube)

The trailer of Disney+ MCU series Hawkeye dropped on the Internet on Monday evening and it is everything we had hoped for. Jeremy Renner's titular character, superhero Clint Barton aka Hawkeye, returns but this time, not alone. He and his mentee Kate Bishop (played by Hailee Steinfeld), an archer superheroine, go on an adventure after one of Hawkeye's nemesis from the past comes back to destroy him. The series picks up from where Avengers: Endgame signed off. Just like the Marvel comics, Clint Barton will play the role of Kate Bishop's mentor in the series too.

The trailer shows Clint Barton enjoying quality time with his family after ages before a masked vigilante from his past, probably from the time Clint Barton spent as Ronin in Avengers Endgame marking people for death after losing his family Avengers: Infinity War, interrupts his life. In Avengers Endgame, Natasha Romanoff (played by Scarlett Johansson) located Clint Barton in Japan and brought him back to re-join Avengers and defeat Thanos. She, unfortunately, died at the end of the film.

The trailer promises power-packed action sequences along with glimpses of Clint Barton trying to get closer to his family while fighting with his nemesis. And all this happens around Christmas.

Sharing the trailer on social media, Marvel Studios wrote: "We invite you on an unexpected holiday getaway, unwrapping a brand-new teaser trailer and poster today for 'Hawkeye,' a new series set in post-blip New York City. Former Avenger Clint Barton has a seemingly simple mission: get back to his family for Christmas. Possible? Maybe with the help of Kate Bishop, a 22-year-old archer with dreams of becoming a Super Hero. The two are forced to work together when a presence from Barton's past threatens to derail far more than the festive spirit."

Hawkeye series will premiere on Disney+ on November 24 this year.

Watch the trailer of Hawkeye here:

Clint Barton or Hawkeye was a member of S.H.I.E.L.D. (Strategic Hazard Intervention Espionage Logistics Directorate) as well as an Avenger. He was with Natasha Romanoff when they went together to the planet Vormir in Avengers: Endgame and when Natasha sacrificed her life for the Soul Stone.