Have You Seen Sanjay Dutt's At-Work Pic From The Sets Of Bhoomi? 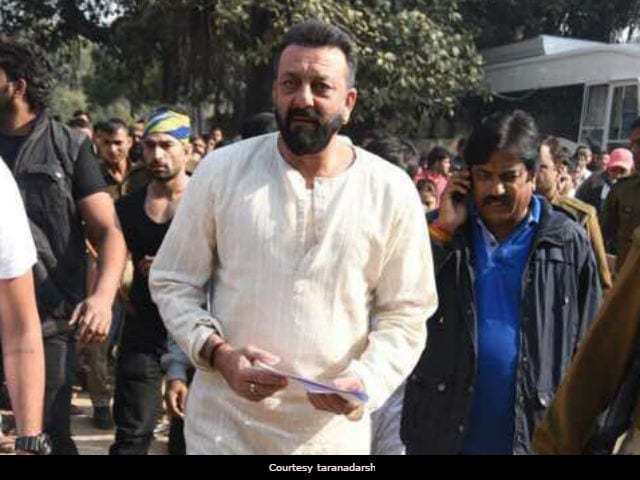 Sanjay Dutt on the sets of Bhoomi in Agra (courtesy: taran_adarsh)

New Delhi: No, it is not Ranbir Kapoor. It's the real Sanjay Dutt who has been at work on the sets of his upcoming film Bhoomi. The 57-year-old actor is being directed by filmmaker Omung Kumar, who also happened to have clicked him recently on the sets of the film. The picture features the Munna Bhai actor, who appears to be sitting in a courtroom with sunlight streaming down the skylight. Mr Dutt simplified the secret behind the picture as he captioned the photograph on Instagram: "On the set of Bhoomi, learning my lines, thanks Omang for the lovely photo."

This is what the actor shared on Wednesday.

On the set of Bhoomi, learning my lines, thanks Omang for the lovely photo

Sanjay Dutt co-stars with Aditi Rao Hydari in the Omung Kumar-directed film. Aditi features in the role of his daughter. Talking about the portrayal of the father-daughter relationship, Mr Kumar had old Mumbai Mirror: "We shortlisted Aditi because she's in a good space right now. I love the way she emotes. The father-daughter relationship is an important aspect of the narrative in this revenge drama. Aditi's face perfectly blends softness with a lot of strength."

Those who are looking forward to Sanjay Dutt's comeback film, have an assurance from Omung Kumar, who previously said that the film will have you hooked till the end. Meanwhile, Sanjay Dutt told PTI that he jumped on board Bhoomi as he wanted his next film to border on emotion and sensitivity.

Promoted
Listen to the latest songs, only on JioSaavn.com
"I have been looking for scripts that went beyond my screen persona. I wanted to do something vulnerable yet powerful. Bhoomi is an emotional and sensitive drama that explores the relationship between a father and daughter," PTI quoted Mr Dutt as saying.

Meanwhile, a substantial part of Bhoomi has already been shot in Agra. It has been rescheduled to avoid clash with Aamir Khan's Secret Superstar, scheduled for August.