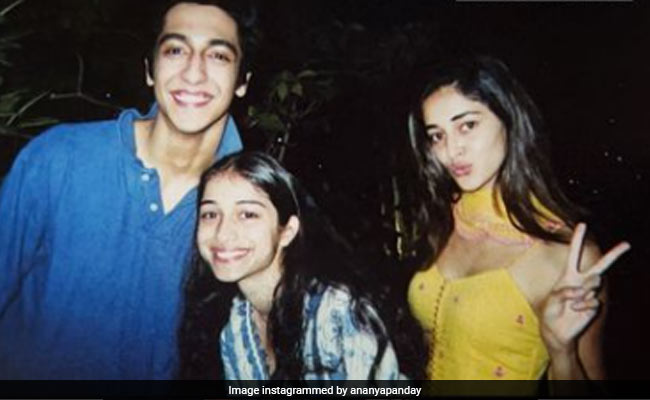 Ananya Panday treated her fans to a photo collage featuring herself, her sister Rysa and cousin Ahaan on Monday and it is as cool as the trio are. On her Instagram story yesterday, Ananya Panday posted three pictures of herself having lot of fun with her sister and cousin. She looks pretty in a yellow outfit in the photos while Rysa can be seen wearing a pale blue kurti. Ahaan Panday, who will reportedly make his debut in Bollywood alongside Ajay Devgn, can be seen sporting a blue shirt in the pictures. Ahaan Panday is the son of actor Chunky Panday's brother Chikki and fitness expert Deanne. 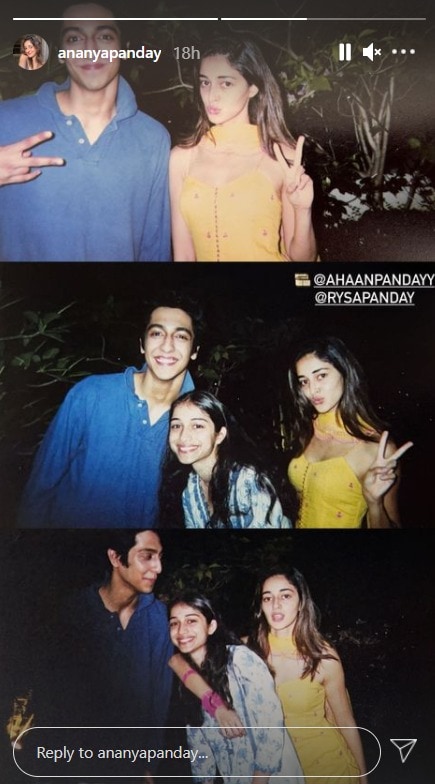 Last year, a report in Bollywood Hungama quoted a source as saying that Ahaan Panday will make his acting debut in a film directed by Shiv Rawail. The film will also star Ajay Devgn and will be backed by Aditya Chopra. "It is rare for a debutant to bag such an expensive film as his launch vehicle. However, Aditya Chopra has full faith in Ahaan's talent and is sure that he'll do justice. Also, he has placed his trust in debutant director Shiv Rawail and is confident that he'll be able to pull off the challenging project. Moreover, the presence of Ajay Devgn will also add to the hype," the source said, reported Bollywood Hungama.

Ananya Panday featured in headlines recently after she returned from her Maldives vacation, where she made memories with her rumoured boyfriend, actor Ishaan Khatter. The duo have co-starred in 2020's Khaali Peeli. Even though the actors didn't share pictures featuring each other on their respective profile, we got a glimpse of Ananya Panday in a video posted by Ishaan from his holiday diaries.

In terms of work, Ananya Panday made her Bollywood debut with Student Of The Year 2, in which she shared screen space with Tiger Shroff and Tara Sutaria. The film was the sequel to 2012's Student Of The Year. She was next seen in Pati Patni Aur Woh, co-starring Kartik Aaryan and Bhumi Pednekar. Ananya's last film was Khaali Peeli. She has a couple of films lined-up now - she will next be seen in a film opposite Vijay Deverakonda (directed by Puri Jagannadh), as well as in Shakun Batra's romantic drama alongside Deepika Padukone and Siddhant Chaturvedi.