If you think this is the first time that Harshvardhan got creative about posting Anil Kapoor's pictures, you need to read on 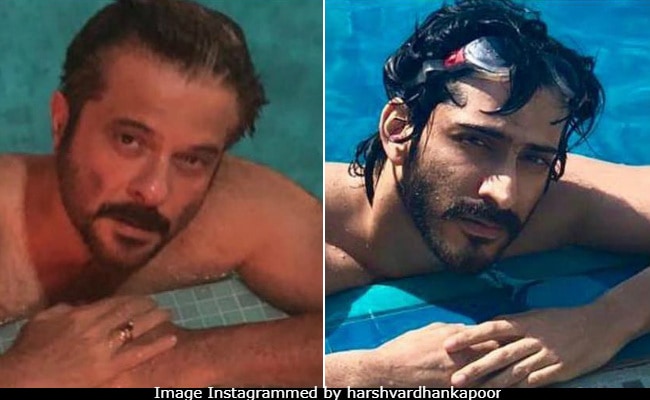 Harshvardhan Kapoor was in the mood for some fun and zeroed in on dad Anil Kapoor to feature in his new Instagram post. Harshvardhan, whose Sunday vibes are making us very, very jealous, had a dug out an old photo of himself that would go with the essence of a "Sunday swim" and picked out a similar picture of Anil Kapoor for his new post. Making a collage of a photo of himself and Mr Kapoor, he introduced his father with a new identity on Instagram and wrote: "I've been protecting the identity of my elder brother ...meet Anil Kapoor ...Happy Sunday!" Harshvardhan Kapoor is the youngest of Anil and Sunita Kapoor's three children - Rhea is the middle child while Sonam is the eldest.

I've been protecting the identity of my elder brother ...meet @anilskapoor ...Happy Sunday #sundayswim ... this creative is by @stevenroythomas

A post shared by Harshvardhan Kapoor (@harshvardhankapoor) on Dec 2, 2018 at 2:47am PST

If you think this is the first time that Harshvardhan got creative about posting Anil Kapoor's pictures, you need to read on. In November, Harshvardhan shared a "then and now" photo on Instagram, featuring himself and Anil Kapoor, which made it evident that the love for sneakers has been passed on through generations. "Like father like son," Harshvardhan had written. Interestingly, Sonam Kapoor's husband Anand Ahuja is also a huge fan of sneaker and owns the brand named VegNonVeg.

A post shared by Harshvardhan Kapoor (@harshvardhankapoor) on Nov 3, 2018 at 8:08am PDT

Harshvardhan Kapoor made his Bollywood debut with 2016's Mirzya and then starred in Bhavesh Joshi Superhero, which released this year. During the promotions of Bhavesh Joshi, Harshvardhan had told news agency IANS that he would want his father to have played the protagonist if his film was made in the Nineties. "I think if Bhavesh Joshi was made in the 1990s, dad would have been a very good fit for the role. He could have done it really well. Bhavesh is a young guy with lot of energy, very extrovert like how dad is."

Harshvardhan Kapoor will next be seen in the biopic on Abhinav Bindra, in which he co-stars with Anil Kapoor.