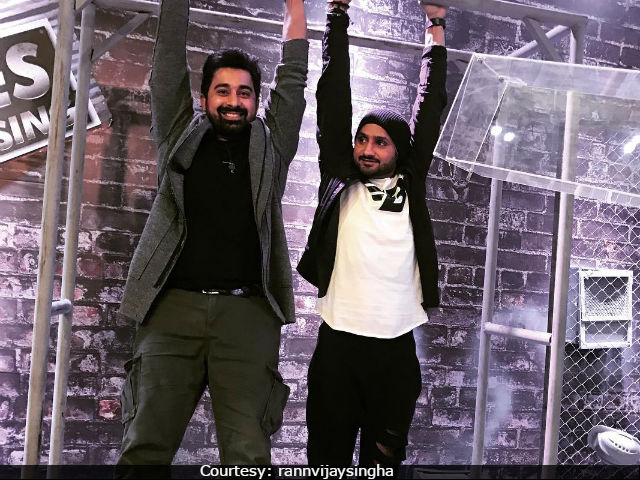 Rannvijay Singha with Harbhajan Singh on the sets of Roadies Rising

New Delhi: After Karan Kundra took an exit from the reality show Roadies Rising, it was reported that cricketer Harbhajan Singh might leave the show after a fallout with fellow judge Neha Dhupia. However, indianexpress.com reported that Harbhajan will be a part of Roadies Rising despite the tiff. "Yes, Harbhajan and Neha did have a verbal spat on the show where the cricketer said he would rather leave. It was because of a task given to a contestant by Neha and Harbhajan did not agree to it. However, there is no truth in the fact that he is leaving the show. He is very much there till the end," indianexpress.com quoted a source as saying.

During the auditions, Rannvijay Singha, Neha, Karan Kundra and Prince Narula challenged a contestant to face his 'biggest fear' and made him sit on a chair that passes electric current. Neha further poured water on his feet. Seeing all this, Harbhajan lost his cool and told the team leaders not to do it as the contestant could die. However, Neha refused to stop and told Harbhajan that he can introduce twists but cannot tell them what to do. Harbhajan retaliated and said that he's not going to be a part of all this and thus, he walked out.

Promoted
Listen to the latest songs, only on JioSaavn.com
Roadies is a youth-based adventurous reality show and is one of the most popular shows since a decade. This year's franchise is called Roadies Rising and is judged by Rannvijay Singha, Neha Dhupia, Roadies X2 winner Prince Narula and the new addition to the show is VJ Nikhil Chinapa, who has replaced Karan Kundra.

Of his exit, Karan Kundra had said that he is moving out due to work commitments. However, indianexpress.com reports that the actor had to leave because he slapped a contestant on the show.