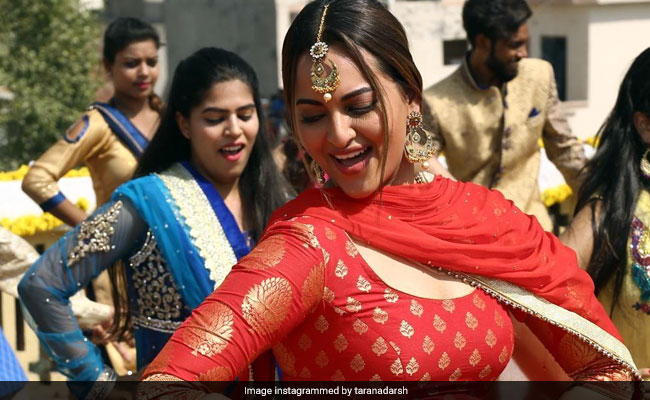 Sonakshi Sinha in a still from the film (Courtesy taranadarsh

Though the Mudassar Ali-directed film had a "fair hold" on Monday, the second Friday will be "crucial" for the film, Box Office Report stated. "It remains to be seen what happens over the course of the week and more crucially the second Friday. There will competition on Friday but it's not as if Happy Phirr Bhag Jayegi needs huge footfalls on the second Friday, even with just 1 lakh people turning up it should get a decent final number," the report stated.

This Friday, two films will hit the screens - Stree and Yamla Pagla Deewana: Phirr Se. With the release of two anticipated films, it will be interesting to see whether Happy Phirr Bhag Jayegi continues to keep its earnings consistent.

In his review for NDTV, Saibal Chatterjee gave Happy Phirr Bhag Jayegi one-and-a-half stars out of five. "Sonakshi does most of the heavy lifting, but the lightness of the film undermines her efforts. The high-on-enthusiasm Jassie Gill, too, is let down by a half-baked character. Jimmy Sheirgill, for once, is unable to rise above the script. Piyush Mishra hams his way through the film," he wrote.