This is how Twinkle Khanna 'jump started' 2018 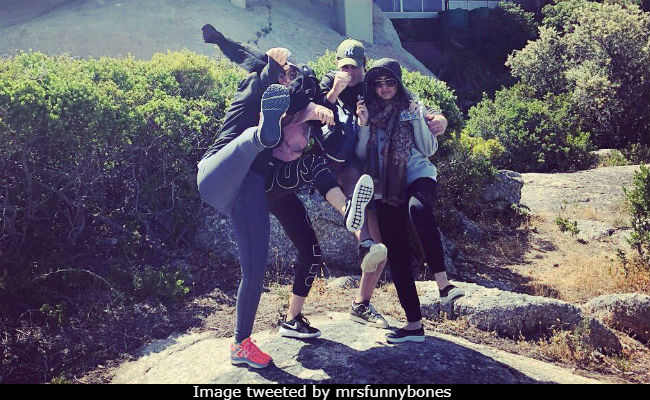 New Delhi: A New Year wish from Twinkle Khanna is just what we were waiting for. Twinkle and her family welcomed the New Year in Cape Town, where they are currently holidaying, and wished fans on social media. Twinkle's tweet is so typically Twinkle that we are not even surprised - "Happy New Year Folks! It's only when you jump into action that things change, even your shawl metamorphoses into a fluttering cape" - she tweeted. The photo Twinkle posted to go with her wish is an optical illusion of sorts, don't you think so? We can definitely spot Twinkle and her sister Rinke Khanna and a flying shawl in the photo.

Happy New Year Folks! It's only when you jump into action that things change, even your shawl metamorphoses into a fluttering cape! #jumpstartthenewyearpic.twitter.com/b8CtlrVEER

While Twinkle's shawl may have made her look like a caped superhero, her husband Akshay Kumar literally jumped from one year to another. "Leaping from 2017 to 2018! Wishing you all a successful year ahead filled with everything to your heart's content," he wrote in his tweet.

Leaping from 2017 to 2018! Wishing you all a successful year ahead filled with everything to your heart's content :) #Happy2018pic.twitter.com/WHxcS1tGrj

Twinkle Khanna and Akshay Kumar flew off to the African destination earlier this month, and just like last year, Twinkle celebrated her 43rd birthday with a close-knit circle of friends and family. Here's one from the birthday lunch.

A perfect birthday with all the people I love the most in the world! pic.twitter.com/YccbMqQCq7

Twinkle Khanna, a former actress, is now a bestselling author and has two books on her resume - The Legend Of Lakshmi Prasad and Mrs Funnybones. Akshay will resume his PadMan duties after he returns from Cape Town. Directed by R. Balki, the movie is produced by Mrs FunnyBones Movies and also stars Radhika Apte and Sonam Kapoor. It is slated to hit screens on Republic Day.