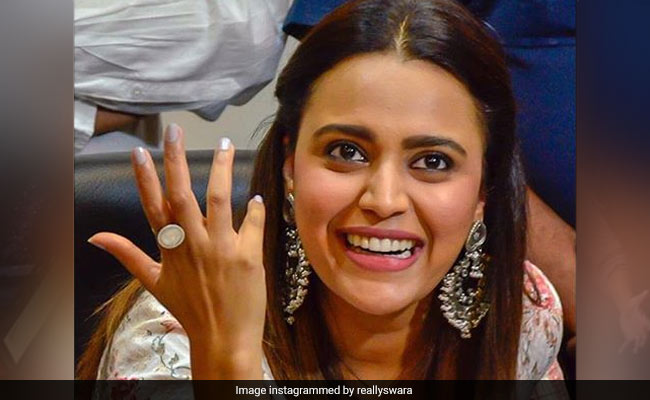 Actress Swara Bhasker used sarcasm again to respond to a tweet on her Tanu Weds Manu co-star Kangana Ranaut's allegedly terrible behaviour on set - Swara has responded with sarcasm to Kangana's recent remarks about her and actress Taapsee Pannu. On Tuesday evening, Swara found herself tagged in a tweet about Kangana's alleged tantrums on the sets of 2015 sequel Tanu Weds Manu Returns after Swara received praise from director Aanand L Rai for a good shot. Swara Bhasker wrote: "Support max by reigning national award winning outsider-star to 'needy-outsider'! Circa 2014. Sigh! Such happy memories." For a better explanation of Swara's tweet, here's some context - Kangana recently referred to Swara and also Taapsee Pannu as "needy outsiders" in a TV interview. She also called them "B-grade actresses" in the same interview and "chaploos" or sycophants in another.

Swara Bhasker's "happy memories" tweet was preceded by more sarcastic responses to Kangana's comments in recent interviews, in which she dismissed Swara and Taapsee as "chaploos outsiders," "B-grade actresses" and referred to them as "Swara Bhasker, Taapsee Pannu-type log" while accusing them of supporting and benefitting from nepotism in Bollywood, as allegedly practiced by filmmaker Karan Johar. In a print interview, Kangana appeared to express concern that Swara and Taapsee have "bills to pay."

Here's what Kangana said in her first TV interview: "I only have to lose here, because tomorrow they (referring to the 'movie mafia') will get some 20 needy outsiders like Taapsee Pannu and Swara Bhasker who will say 'oh only Kangana has a problem with Karan Johar, but we love Karan Johar.' If you love Karan Johar, why are you both B-grade actresses? You are better looking than Alia Bhatt and Ananya, you both are better actresses, why don't you get work? Your existence is a proof of nepotism. What are you telling me how happy you are with this industry?"

Here are some of the tweet responses from Swara and Taapsee:

Hi @RichaChadha@ReallySwara someone is really concerned about our bills n our EMIs. Such a kind compassionate industry. So much respect for our 'B grade' struggle.

Swara Bhasker was last seen in Rasbhari on Amazon Prime, for which she has been critically acclaimed. Apart from her acting accolades, Swara Bhasker is known for speaking out on pressing social issues, contributing to political debates and calling out trolls on Twitter. She will next be seen in Sheer Qorma.