Twinkle Khanna is celebrating her 43rd birthday in Cape Town 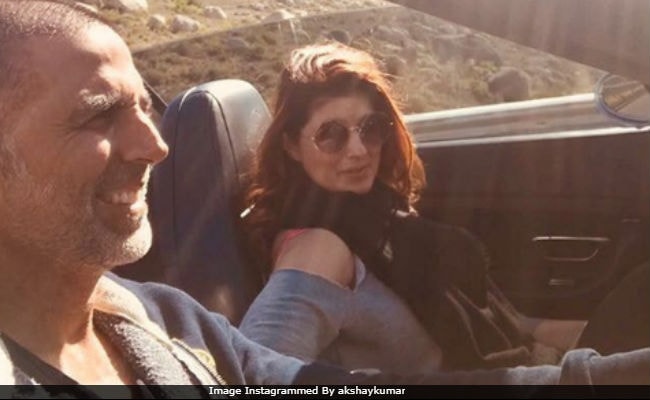 Akshay Kumar and Twinkle Khanna have been married since 2001 (Image courtesy: akshaykumar)

New Delhi: Author-columnist Twinkle Khanna is celebrating her 43rd birthday in Cape Town today (her favourite holiday destination). On Twinkle's special day, her actor husband Akshay Kumar posted a wonderful picture of the duo, along with a sweet message. The picture appears to be taken during their ongoing holiday. Akshay drives across the African port city while Twinkle sits beside him. "Forever making every ride full of adventure and amusement, my favourite companion...for life! Happy birthday, Tina," he captioned the post. She coincidentally shares her birthday with her superstar father Rajesh Khanna. Twinkle Khanna and Akshay Kumar have been married since 2001.They have two children, son Aarav and daughter Nitara.

Check out these pictures from Akshay and Twinkle's Cape Town diaries.

Soaking up some South African sun with this good boy #MorningSnuggles

Deep blue sea and skies to match, long conversations and fishing for a catch :)

#HappinessIs... meeting an old friend and starting exactly where you left off :) Nitara meets Valentino 2.0

I want to be like a child again-to climb trees and perch on branches, only because the tree exists and so do I... #treehuggers #familyfunday #capetown

Promoted
Listen to the latest songs, only on JioSaavn.com
Meanwhile, on shared birthday, Twinkle posted an old picture of herself with father Rajesh Khanna and wrote, "Happy Birthday Dad."

Twinkle Khanna made her acting debut with 1995's Barsaat and has starred in films like Baadshah, Mela and Jab Pyaar Kisise Hota Hai. She gave up an acting career to be an interior designer and, now, she's a columnist and a best-selling author. Twinkle is also producing Akshay Kumar's forthcoming film Pad Manunder her production house Mrs Funnybones Movies. Akshay won the National Award for Best Actor this year, for his work in 2016 film Rustom and his last release Toilet: Ek Prem Katha was hugely successful at the box office.