Inside birthday wishes for Salman Khan on his 52nd birthday 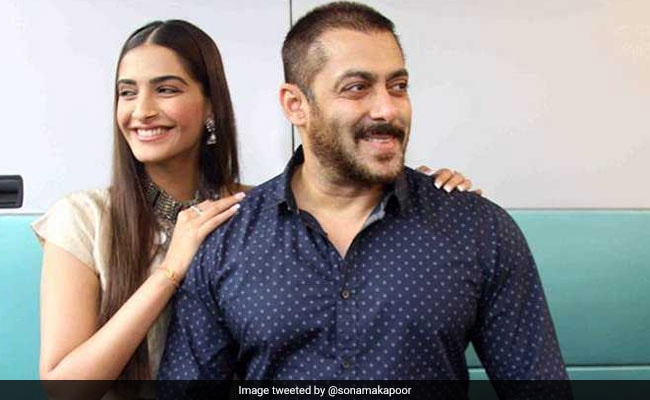 New Delhi: 'Charming,' 'chivalrous' and 'caring' are some of the words used by Bollywood celebrities, to describe our favourite bhaijaan Salman Khan, who is celebrating his 52nd birthday today. The stars are constantly sending their best wishes to the Dabangg star, who is celebrating his birthday at his farmhouse in Panvel. Nothing could have been better for Salman than to receive so many heartfelt messages on his special day. From his friend and Prem Ratan Dhan Payo co-star Sonam Kapoor and actors Aamir Khan, Bipasha Basu to Riteish Deshmukh, everyone has posted their birthday wishes for Salman Khan. Salman Khan has double reasons to celebrate as his latest film Tiger Zinda Hai is performing superb at the box office. "Dearest Salman, have a great day and a wonderful year! Many happy returns of this day! Congratulations on the record breaking collections! Superb! Love," writes Aamir Khan. Aamir's tweet just made us revisit the Andaz Apna Apna memories.

Dearest Salman, have a great day and a wonderful year! Many happy returns of this day! Congratulations on the record breaking collections! Superb!
Love.
a.

Not only Aamir, but the third part of the Bollywood Khan trifecta also wished Salman in the most adorable way - Shah Rukh Khan sang a few lines for his Karan Arjun counterpart at a Mumbai event recently. "Tum jio hazaaron saal.... I wish him all the best. I won't be able to meet him tomorrow because my children are here and I want to spend time with them. But we will celebrate when he comes back. We can celebrate Salman Khan's birthday month long," IANS quoted the actor as saying.

Here's what Salman Khan's Prem Ratan Dhan Payo co-star Sonam Kapoor tweeted: "Looking back at my time in Bollywood, no one stands out as much as you! My first ever hero and long time friend and inspiration. Happy Birthday Salman, thank you for being the finest co-star I could have asked for."

Looking back at my time in Bollywood, no one stands out as much as you! My first ever hero and long time friend and inspiration. Happy Birthday Salman, thank you for being the finest co-star I could have asked for @BeingSalmanKhanpic.twitter.com/WA3ICeUDQb

Happy birthday @BeingSalmanKhan Many many congratulations for the super success of #tigerzindahai too. Celebrations galore

Adorable, isn't it? Thank You, Ali Abbas Zafar for these heartwarming photos.

Here are some other stars who did Salman Khan's Swag Se Swagat of his birthday with these heartfelt wishes.

Happy Birthday, @BeingSalmanKhan , thank you for your faith, for being so chill & for giving us the space to do what we do in both #TigerZindaHai & #Sultan . You've carried both to amazing heights, and it's been a privilege to have our songs fly along with you.

Happy birthday to the very handsome and my big brother @BeingSalmanKhan bhai .. and yes he is the real tiger... love you bro:) pic.twitter.com/loq2u6A6mr

Happy bday to someone who is all heart and rules all hearts!!! Big hug @BeingSalmanKhan !!!

Promoted
Listen to the latest songs, only on JioSaavn.com
Salman Khan's birthday definitely had a Kick. He surprised his fans and followers with the announcement of his new film Bharat. Salman Khan's new film will be jointly produced by Atul (Salman Khan's brother-in-law) and Bhushan and it will be directed by Ali Abbas Zafar. Ali Abbas Zafar and Salman Khan also collaborated on 2016 super hit film Sultan. "Bharat (is) a human drama that is bound to touch you beyond measure," said Bhushan Kumar.

We wish Salman Khan a very happy birthday and a superb year ahead.