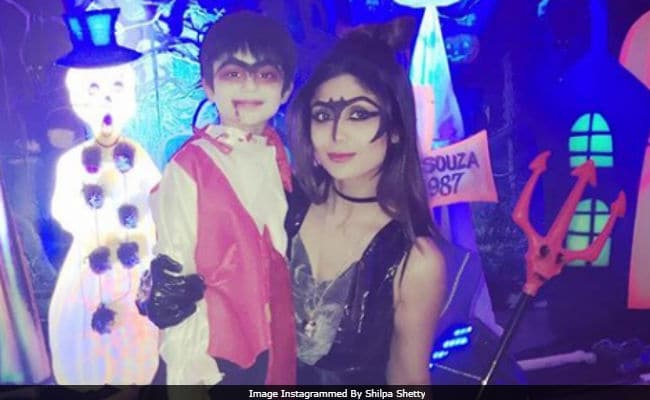 New Delhi: Actress Shilpa Shetty was on 'mommy duty' last night and hosted a Halloween party for son Viaan and his friends. Shilpa, 42, shared a posted a few pictures from the party and Viaan, 5, looked too cute in his vampire dress. "My 5yr old lovvvvees dressing up and insisted on the "Vampire look," the actress wrote while sharing a picture of herself with Viaan. In another post, Shilpa mentioned that Viaan's friends were 'happy' with the gifts they received and so was she. Shilpa Shetty married businessman Raj Kundra in 2009 in Mumbai. Viaan is the couple's first child. See the pictures from Shilpa and Viaan's Halloween party.

Can you recognise the person with Shilpa in this picture? Ummm, that's Mr Kundra. "Happyyyy Halloween from the Mr and Mrs... tried to be Bat-Devil (if there's anything like that!)," she captioned the post.

Shilpa's sister Shamita was also a part of the Halloween celebrations. She was dressed as Maleficent.

Months ago, Viaan won the Internet with his Spider-Man look.

Shilpa Shetty is the star of films such as Baazigar, Dhadkan, Life In A... Metro and Apne. She has now been known as a yoga expert and also has a range of yoga fitness videos. She's has appeared in two famous songs - UP Bihar Lootne and Shut Up & Bounce. In 2014, Shilpa Shetty produced her first film Dishkiyaoon, starring Harman Baweja and Sunny Deol. She currently co-judges dance reality show Super Dancer 2 and has previously featured as a judge on Jhalak Dikhhla Jaa.
Comments
halloween 2017Shilpa ShettyViaan Raj Kundra

Shibani Dandekar Was Farhan's Plus One At Javed Akhtar's Exhibition. See Pics