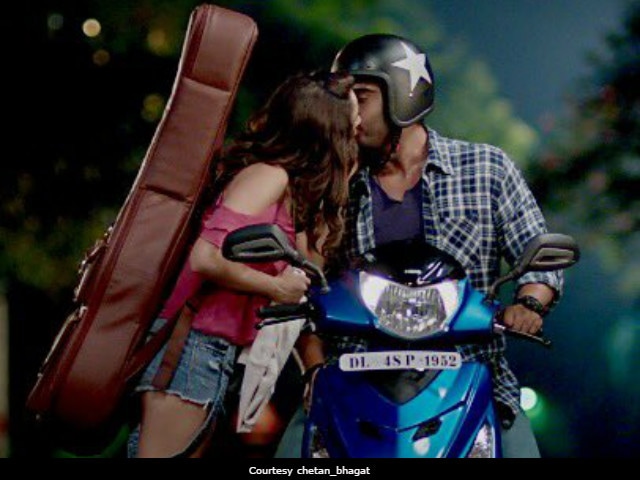 Half Girlfriend: Shraddha Kapoor And Arjun Kapoor from the film (courtesy: chetan_bhagat)

New Delhi: Shraddha Kapoor and Arjun Kapoor are teasing fans and followers majorly ahead of the trailer of Half Girlfriend. And credit goes to author Chetan Bhagat, who shared new stills from the film, which is an onscreen adaptation of his 2014 book of the same name. "For those waiting patiently for the trailer on Monday, here are some special stills from the movie, only for you," Mr Bhagat tweeted on Saturday. We already know that Shraddha plays a Delh-girl Riya Somani while Arjun urf Madhav Jha switched from Bihar to Delhi for studies. Basketball remains the common connection - Riya is a basketball player while Arjun is an enthusiast. The trailer of Half Girlfriend promises to reveal more details when it releases tomorrow.

The new stills from Half Girlfriend mostly feature Shraddha from the basketball court. She looks determined and all set to take down her opponents. One of the stills features the duo as kissing - it appears the two are sharing a kiss ahead of a bitter-sweet goodbye.

For those waiting patiently for the #halfgirlfriend trailer on Monday, here are some special stills from the movie, only for you! pic.twitter.com/X5TTpRYW8O

Meanwhile, the new poster of Half Girlfriend finally attempts to answer the question raised by Arjun Kapoor in the teaser of the film - "Yeh half girlfriend hota kya hai?" The new poster describes the phrase as "Dost se zyada and girlfriend se kam.

Promoted
Listen to the latest songs, only on JioSaavn.com
Half Girlfriend director Mohit Suri confessed in an interview to DNAthat he tweaked the story of the actual novel to eliminate certain "dark, sexual" bits. The book Half Girlfriend mentions how Riya, a rich Delhi girl, was sexually abused as a child, which was deemed irrelevant by the director.