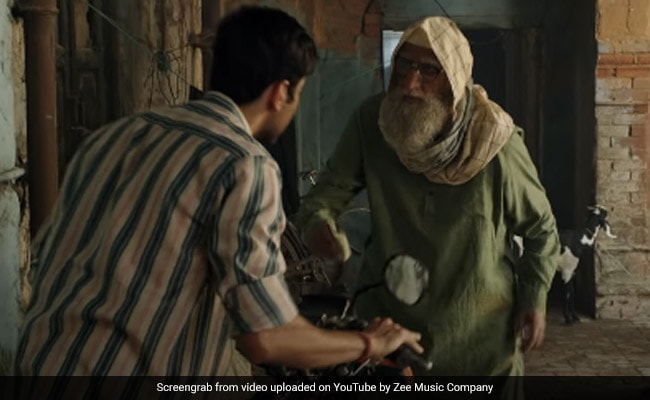 Amitabh Bachchan and Ayushmann Khurrana in a still from Jootam Phenk. (courtesy Youtube)

The first song of Gulabo Sitabo is here! Jootam Phenk, from Amitabh Bachchan and Ayushmann Khurrana's film, is as hilarious as the trailer. In the music video, Ayushmann and Big B can be seen continuing their super hilarious clash as landlord and tenant after the film's trailer. The song Jootam Phenk traces the life of Big B, as landlord Mirza, and Ayushmann, as tenant Baankey, who engage in clashes regarding their day-to-day activities. In a snippet of the music video, Ayushmann can be seen kicking at a dilapidated bathroom wall and breaking it. In the next scene, Big B can be seen trying to chase him as Ayushmann tries to run away with his bicycle. Big B announced the release of the song on his Instagram profile and wrote, " Hoshiyaari ki baatein toh seekh li hai, ab dekh bhi lijiye... Jootam Phenk, out now!" Take a look:

Jootam Phenk is sung by Piyush Mishra and composed by Abhishek Arora. The lyrics of the song have been written by Puneet Sharma. Take a look at the song here:

Earlier, the makers of the film announced that Gulabo Sitabo will be released on Amazon Prime, as theatres are shut down due to the coronavirus outbreak.