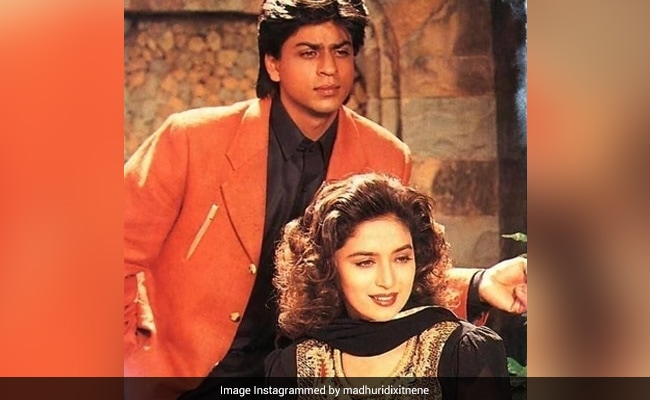 We have all tried to mimic Madhuri Dixit's iconic steps from the song 'Channe Ke Khet' at least once in the past. But can you believe that it has been 27 years since the release of 'Anjaam' - a movie that had some stellar performances and songs? On the occasion, Madhuri shared her feelings about the movie that featured the actress alongside Shah Rukh Khan and Deepak Tijori. In her latest Instagram post, she wrote, "One of my memorable films with Shah Rukh Khan and #DeepakTijori filled with lots of emotions, drama, and entertainment."

The post was made even more special by the vintage photos that she shared. The first photo features Madhuri and Shah Rukh. Madhuri in a black kurta and Shah Rukh in an orange jacket reminded us of just how cool the nineties was. In the second photo, Madhuri is seen in her costume from the song 'Channe Ke Khet'. The last image features all three actors in between a scene.

Fans and colleagues of the actress took a trip down memory lane after Madhuri posted the photos. They were delighted to revisit the memories of the movie. The comments section was filled with praises of Madhuri.

Praising the film, one fan wrote, "Old is gold." Madhuri's fans could not help gushing about her beauty. "She looks the same," one comment read. "You are fantastic," another fan added.

The 1994 film was a psychological thriller that featured Madhuri and Shah Rukh together for the first time. The film also had Tinnu Anand, Johnny Lever, Kalpana Iyer, Himani Shivpuri and Sudha Chandran in important roles. 'Anjaam' was directed by Rahul Rawail.

Madhuri, who was last seen in 'Kalank', will appear next in the Netflix original 'Finding Anamika'.

Arjun Rampal, "Free Of COVID" Now, Shares How He "Recovered So Fast"