Guess The Star Celebrating His Parents' Anniversary With This Throwback 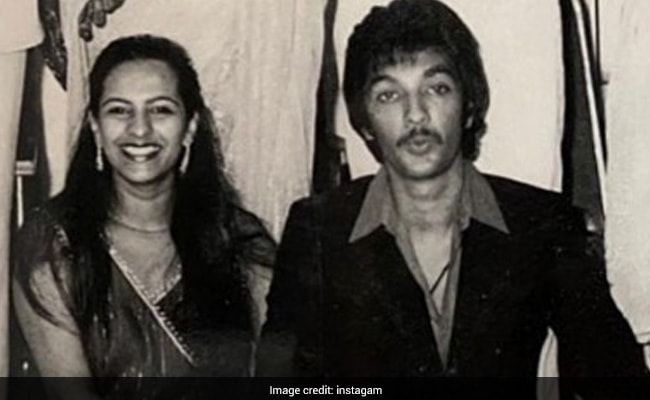 Such a blast from the past (courtesy ranveersingh)

It's a special day for Ranveer Singh, whose parents Jagjit Singh Bhavnani and Anju Bhavnani celebrate their 40th wedding anniversary today. The 35-year-old actor brough the celebrations to Instagram and for doing so, he took a trip down memory lane. Ranveer shared a black and white photo of his parents, which reeks of nostalgia. He accompanied the throwback photo with one of his parents from present times just to show nothing's changed. "40 years of marriage," Ranveer captioned her post and added the hashtags "#purelove" and "HappyAnniversary."

Here's how Ranveer Singh wished his parents on their anniversary. Jagjit Singh Bhavnani and Anju Bhavnani are also parents to Ranveer's sister Ritika.

Ranveer Singh's family members often make it to super cool posts on the actor's Instagram and nothing can beat this so far. Here's when Ranveer's "Nana-G" outshined everyone and everything on the gram in a Gucci hat.

Well, throwback photos are also galore on Ranveer's Instagram, some featuring his sister Ritika. On her birthday last year, Ranveer took the liberty of sharing this retro throwback.

Pretty much sums it up ???? #happybirthday Didi ❤️ I love you @riticulousness

Meanwhile, Ranveer Singh has wrapped the shooting schedules of two of his upcoming movies - '83 and Jayeshbhai Jordaar. Directed by Kabir Khan, '83 was scheduled to release in April but was postponed indefinitely as the coronavirus lockdown was imposed. Yash Raj Film's Jayeshbhai Jordaar is expected to hit screens on October 2. Ranveer will also feature in a cameo in Akshay Kumar's Sooryavanshi. Ranveer's upcoming projects also include Karan Johar's period drama Takht.