"Good That Your Mother Is Not Around To See This": How Janhvi Kapoor Was Trolled After Dhadak

"I would rather live in a bubble where everything is okay and then try to improve myself," said Janhvi Kapoor 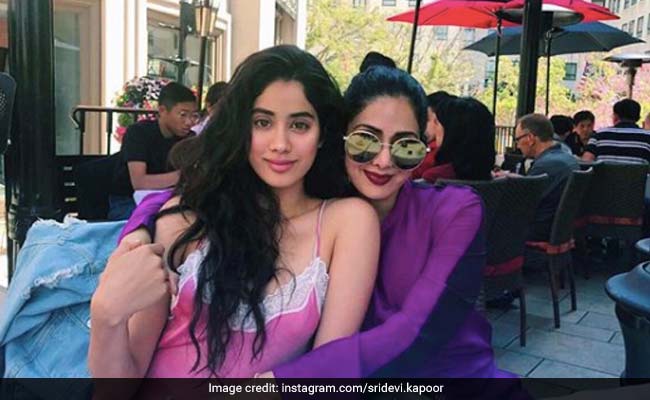 A file photo of Janhvi Kapoor and Sridevi. (courtesy: sridevi.kapoor)

Janhvi Kapoor, daughter of late actress Sridevi and film producer Boney Kapoor, who is frequently on the receiving end of trolls for her film background, in a recent interview with Bollywood Hungama, recalled the bitter things people told her after the release of her debut film Dhadak in 2018. Janhvi, who lost her mother and legendary actress Sridevi in February, 2018, just a few months before Dhadak's release, said during the interview: "When my first film came I even got comments like...'Good that your mother is not around to see this'." The actress added that she tried to focus only on ways to improve herself and told Bollywood Hungama: "I can't allow myself to get bitter or hurt. I'd rather see the criticism as an opportunity to better myself. I would rather live in a bubble where everything is okay and then try to improve myself."

Janhvi Kapoor recently featured in Gunjan Saxena: The Kargil Girl. The film was named on the list of 'star kids' that a section of the Internet said it would boycott. The film released on Netflix earlier this month. It also stars Angad Bedi, Pankaj Tripathi and Vineet Kumar Singh.

Earlier this year, Janhvi's sister Khushi Kapoor shared an Instagram video in which she revealed that she was often "made fun of" because she didn't look like her mother Sridevi and her sister Janhvi Kapoor. "I'm kind of shy and awkward. Obviously, sometimes, the hate gets to you, especially being so young. I just want people to know I am a real person. I didn't really know how to handle it, so my self-esteem issues and insecurities stem from that. As a child, it affected the way I saw my parents. I didn't look like my mom and I didn't look like my sister, so sometimes, people would point that out and make fun of me," she said in the video.