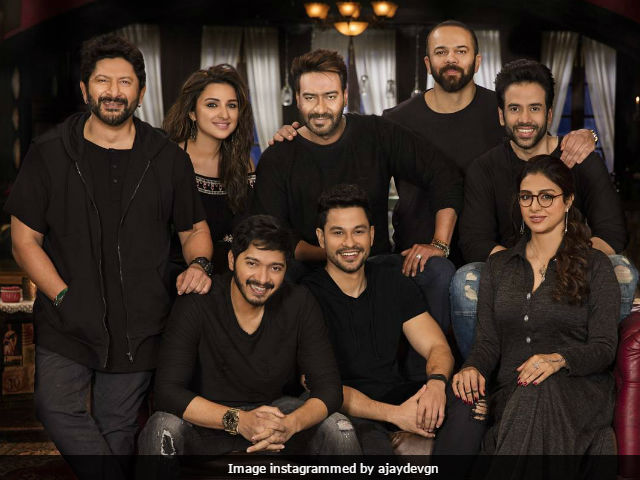 New Delhi: Ajay Devgn, who is celebrating his 48th birthday today, shared a photograph of himself with the entire cast and crew of Golmaal Again. The 47-year-old actor announced that the first schedule of Rohit Shetty's action comedy, which was being shot in Mumbai, has been wrapped. The film, which features Ajay Devgn, Arshad Warsi, Kunal Khemmu, Tusshar Kapoor, Parineeti Chopra, Tabu and Neil Nitin Mukesh in lead roles, will mark the fourth installment of the Golmaal film series. On March 31, actor Sanjay Dutt visited the sets of the movie and the entire team was delighted to have his company. They happily posed with the 57-year-old actor.

See the pictures shared by Ajay Devgn below:

Golmaal Again is scheduled to release in theatres in November.

Promoted
Listen to the latest songs, only on JioSaavn.com
Ajay Devgn was last seen in 2016 movie Shivaay. The film, which also featured Sayyeshaa Saigal, and Erika Kaar in lead roles, was the Singham actor's mega directorial project. He will next feature in Milan Luthria's Baadshaho. The film also stars Emraan Hashmi, Esha Gupta, Ileana D'Cruz and Vidyut Jammwal.

Baadshaho is Ajay Devgan fourth collaboration with the Milan Luthria after Kachche Dhaage (1999), Chori Chori (2003) and Once Upon a Time in Mumbai (2010). The movie is scheduled to release in theatres on September 1.